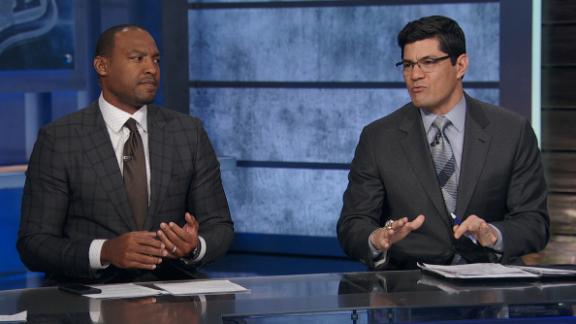 Sources told ESPN that the extensions are for two years each and run through the 2020 season.

Bowles was reluctant to discuss the extension with one game to play, but he believes the team has made progress this season.

"Obviously, the future is trying to win a Super Bowl and trying to get to the playoffs," he said. "We'll add some pieces. We made some strides this year. Not enough strides, not winning enough games, but going forward we'll make the proper adjustments and go from there."

The moves came as no surprise, as it became clear in recent weeks that ownership was satisfied with the performance of Bowles and Maccagnan in what was considered a rebuilding year.

"We are very happy to have extended both Mike and Todd," acting owner Christopher Johnson said in a statement. "During their time here, they have worked together to help the organization build a foundation on which to grow. They are identifying, developing, and getting productivity out of our players.

"I believe we are headed in the right direction. This provides us continuity and stability as we continue to move this team towards sustained success. We still have a lot of work to do and I am excited to work closely with both of them as we move forward."

Bowles and Maccagnan, hired on the same day in 2015, were both entering the final year of their contracts. They are considered equals in the organizational power structure and report directly to ownership, so technically, Maccagnan didn't determine Bowles' fate.

Bowles is 20-27 in his three seasons with no playoff appearances. Ownership set low expectations at the start of this season, saying Bowles and Maccagnan would be evaluated on whether the team showed progress, not its won-lost record.

After a promising start, the Jets lost eight of 10 games -- one of the franchise's worst stretches in recent history -- heading into the season finale against New England.

Still, five wins was more than many expected from the Jets, who gutted their roster last offseason and embarked on a youth movement. Despite obvious personnel deficiencies, they were competitive in nearly every game. They lost six games by eight or fewer points.

Maccagnan has yet to solve the team's greatest issue -- the quarterback situation -- but his three drafts have produced promising playersLeonard Williams, Darron Lee, Jamal Adams and Marcus Maye.

Friday's news represents the first major move for Christopher Johnson. The younger brother of owner Woody Johnson, he assumed day-to-day control of the team when the Trump administration announced in June that Woody would be the U.S. ambassador to the United Kingdom.

Speaking to reporters early in the season, Christopher Johnson said he had the sole power to hire and fire, adding that his brother has no involvement in team affairs.

In recent weeks, Bowles refused to address questions about his job security, saying he wouldn't talk about his job during the season. Several players publicly supported Bowles, who was widely praised for cleaning up the turmoil that plagued the team in 2016.

Bruschi: Bowles is a 'solid head coach who knows what he's doing'
Ted Bruschi explains that the Jets are smart to extend Todd Bowles' contract through the 2020 season because he gets the most out of his players.
Report a correction or typo
Related topics:
sportsespnextensionstodd bowleschristopher johnsonnew york jetsnflmike maccagnan
Copyright © 2020 ESPN Internet Ventures. All rights reserved.
More Videos
From CNN Newsource affiliates
TOP STORIES