Jets preparing to be without CB Buster Skrine after concussion 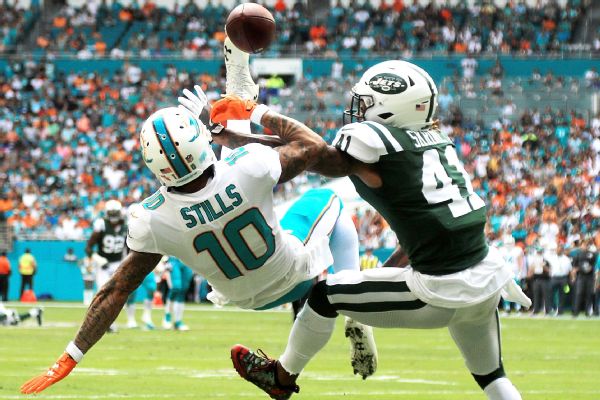 FLORHAM PARK, N.J. -- New York Jets cornerback Buster Skrine suffered his third concussion in the past two years and might not play Sunday against the Atlanta Falcons.

Skrine was injured last Sunday, but he played the entire game. He didn't report symptoms until Monday morning, according to coach Todd Bowles.

With 7:32 remaining in the 31-28 loss to the Miami Dolphins, Skrine collided with wide receiver Leonte Carroo on a "pick" play near the goal line. Skrine's helmet came off and he got up slowly, but he remained in the game.

It was a nightmarish game for Skrine, who committed three penalties and allowed three touchdown passes, including one to Kenny Stills a few plays after his collision with Carroo.

"I guess it happened during the game," Bowles said. "He didn't come in until Monday morning."

There would be a void in the Jets' secondary if Skrine isn't able to play Sunday. He starts in the base defense and slides inside to slot in the nickel package.

The Jets don't have an experienced replacement for the slot. Chances are, they would use Darryl Roberts or Juston Burris. They also signed cornerback Robert Nelson from their practice squad. Skrine's backup, rookie Xavier Coleman, suffered a season-ending shoulder injury against Miami and might need surgery to repair a torn labrum.