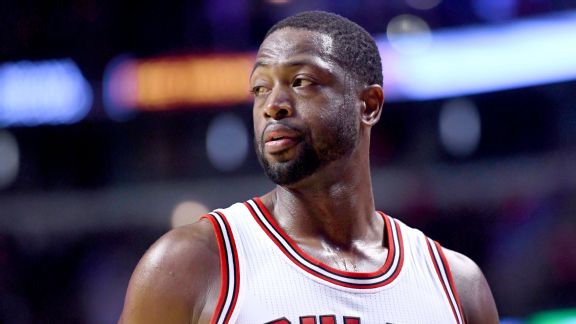 ATLANTA -- Chicago Bulls guard Dwyane Wade tweeted out an apology to fans after an embarrassing 102-93 loss to the Atlanta Hawks on Friday night.

Wade's frustration came after another poor performance by the Bulls in which they were outscored by 22 in the first quarter and trailed by 29 at the half.

"I've been, we've been tired of this," Bulls All-Star swingman Jimmy Butler said. "We got to come out better, man. We got to start playing better from the jump. Forty-eight minutes, man. It's terrible basketball. That's not the way we're supposed to play.

"It's so disappointing because the way we practice isn't the way that we play in the game. Don't ask me why -- I don't know. Starting from me going all the way down the line, we've got to be better as a whole, as a team. Otherwise, we're just going to keep getting our asses beat. It's bad."

Bulls head coach Fred Hoiberg was pleased with the focus his team showed during the ast two days of practice and in Friday morning's shootaround, but as has been the case for much of the year, the Bulls have had problems translating that effort from practices to games.

Both Hoiberg and his players can't seem to figure out why that continues to be such a problem.

"I don't know," Butler said. "Practice is good, practice is great ... practice is not going to win you games -- the games is going to do that. Practice is going to get you ready for it. But we got to take what we do in practice over into the games, man. It's like whenever we go up against each other, we're tough. We're hard to score on, hard to guard, all of the above. But when we go up against somebody else, it's way too easy on both ends of the floor. When we're playing like that it doesn't look good. We get down and then we just continue to dig ourself a bigger hole. When we decide to get ourselves out of it, by that time it's entirely too late."

Wade, who finished the game shooting 2-for-10 from the field, echoed those sentiments after the game.

"I don't know," Wade said. "I don't. But the only thing I can do is focus on trying to consistently bring in that excitement in practice, that focus, let everyone know. And then hopefully consistently have it more in the games. It's not like we don't do it -- it's just some nights we don't, some nights we do. There's a lot of teams in the NBA that's in the same situation we're in. A lot of teams don't have it. The ones that do have it, they're very, very good."

For his part, Hoiberg said that the Bulls would evaluate rotation changes after the poor effort in the first half. The Hawks were able to get anything they wanted in the first 24 minutes of the game on either end of the floor.

"We're going to look at everything," Hoiberg said. "We'll see how we go out and start [Saturday]. We'll have a couple days after that and hopefully try and figure some things out."

Butler knows that actions speak much louder than words do when it comes to fixing what ails his team. He isn't sure why they continue to have so many problems finding a consistent intensity.

"I can't put a word on it because it's just talk. No matter what we say, if we don't go out there and do it, what the hell is talking about it going to do, you know what I mean? We've been up and down like this all year," Butler said. "When we decide not to guard and turn the ball over, games get out of hand very quickly."

The Bulls take on the Sacramento Kings on Saturday night. Wade is expected to play on the second night of the back-to-back after playing only 20 minutes against the Hawks. Butler is hopeful that his team will follow up Friday's poor effort with a better showing against the Kings.

"I take everything personal," Butler said. "I hate losing. I'll leave it at that. Losing is something that I don't accept. We shouldn't accept. We got to go out and be better. It pisses me off because I know what we're capable of in this locker room, and losing isn't OK on our watch ever. Ever."