Jimmy Butler to have MRI Monday 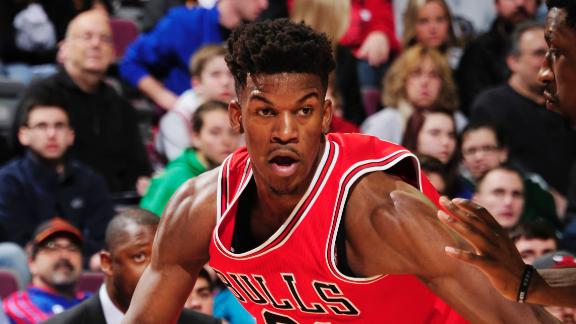 CHICAGO -- Jimmy Butler left Sunday's 96-86 loss to the Los Angeles Clippers after hyperextending his left elbow. He did not return to the game and is scheduled to have an MRI on Monday.

The Butler setback is the latest for a Chicago Bulls squad that has been bitten hard by the injury bug in recent days. Taj Gibson missed Sunday's game after spraining his left ankle in Friday night's win against the Minnesota Timberwolves. Gibson left the United Center on Sunday wearing a walking boot and has already missed time this season because of the same injury.

Derrick Rose is expected to be out for four to six weeks after having a meniscectomy on his right knee on Friday. Rose appears to be in good spirits after starting his rehab on Saturday and was at the United Center early as his rehab process continues.

On top of those injuries, Bulls coach Tom Thibodeau said that All-Star center Pau Gasol remains under the weather and praised the veteran big man for playing on Sunday despite being sick. Gasol was just 2 for 13 from the field, scoring four points and grabbing 15 rebounds.

"It's tough to lose players to injuries," Bulls center Joakim Noah said. "We just got to -- the games keeps coming. It's disappointing that we lost tonight. Hopefully [Butler's] going to be all right, just get ready for the next one."

The Bulls hung tough with the Clippers through three quarters, heading into the fourth tied at 69, but the offense sputtered late and lacked rhythm all day. Bulls rookie Nikola Mirotic scored a career-high 29 points, but he was the only Bull to register a field goal in the final 12 minutes.

"We didn't get it done," Thibodeau said.

With the uncertainty surrounding Gibson and Butler's injuries, and Rose out for at least a month, the Bulls know they are going to have to find offense from other places. The problem for them is that aside from Gasol's consistency, they aren't sure who from this group will be able to step up night to night on that end of the floor.

"Nobody feels sorry for us," Noah said. "We just got to hope he's all right and come ready to work."

Jimmy Butler Hyperextends Elbow
Michael Wilbon breaks down the latest on Jimmy Butler, who will have an MRI after suffering a hyperextended elbow during the Bulls' loss to the Clippers.