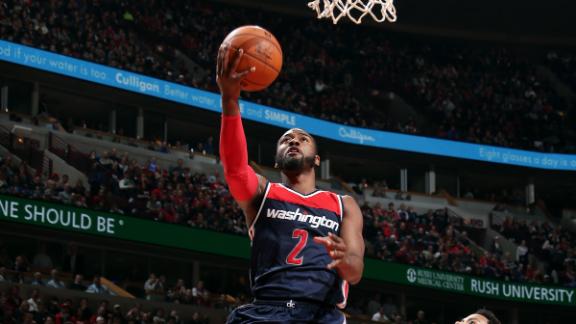 CHICAGO -- Chicago Bulls center Joakim Noah exited Wednesday night's 105-99 loss to theWashington Wizards because of a sprained right ankle and did not return.

Noah had two points, three rebounds and two assists in the first half. Taj Gibson took his play to start the third quarter. Bulls head coach Tom Thibodeau said Noah would be re-examined on Thursday.

Noah left the United Center in a walking boot.

The Bulls take on the Boston Celtics on Friday night and Bulls point guard Derrick Rose knows it will be tough for his team if Noah has to miss time.

"It's going to be huge when you lose a player like Jo with his energy and just his size," Rose said. "Because we're a big team and we got a lot of big guys, but losing a seven footer on any team, a starting seven footer, I think it would hurt any team."

Veteran big man Pau Gasol knows the game changed when Noah couldn't come back to start the second half.

"Obviously it was a factor," Gasol said. "We were up when he was in there and we were down when he wasn't. Jo does a lot of things for us defensively. His activity and his length are important for us. That's unfortunate that he got hurt and wasn't able to play."

This isn't the first injury setback for Noah this season. The All-Star center has been to find his form all season after arthroscopic surgery on his left knee last May and still does not look like his old self. After earning the Defensive Player of the Year award last season, Noah continues to look a step slow this year, averaging just 7.8 points and 9.6 rebounds this year, while adjusting to playing with Gasol.

Noah missed four games earlier in the year because of the same ankle and knee injuries. He sprained the same right ankle on back-to-back nights, Dec. 2 in a loss to the Dallas Mavericks and tweaked it again in a win over the Charlotte Hornets on Dec. 3. He played 33 minutes in a loss to the Golden State Warriors on Dec. 6 and then missed the next four contests.