Joe Maddon on ump's zone: 'We're not going to take that from anybody' 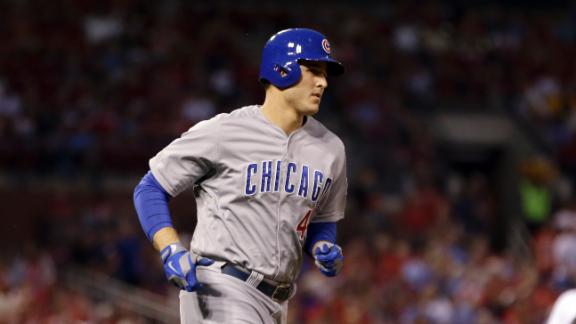 He let Reyburn know his thoughts on the field before being ejected in the sixth inning, then continued his criticism while speaking to reporters after the game.

"It was egregiously bad," Maddon said. "You cannot permit that to happen. We're trying to ascend, and we're not going to take that from anybody, anywhere at any time."

Maddon said he was especially not pleased with how Reyburn was treating his young players.

The Cubs regularly start three rookies in the lineup.

"I'm not going to put up with anything," Maddon said. "I'm not. And I'm not going to allow our guys to get shortchanged based on the fact they have haven't been here a long time.

An MLB spokesman said Thursday that the league was reviewing Maddon's comments.

First-year players Kris Bryant, Jorge Soler and Addison Russell struck out a combined six times in the game, prompting the ejection and postgame tirade by Maddon.

"And I'll further add our guys handled the moment extremely well," Maddon said. "I'm proud of the fact they didn't turn on an umpire or say anything disrespectful. They didn't act like a bunch of babies. They didn't do any of that, and I thought that was spectacular also."

The Cubs snapped a four-game losing streak with the victory while ending an eight-game winning streak for the Cardinals.

"That's what you ask for from a manager," winning pitcher Jon Lester said. "It was nice to see."