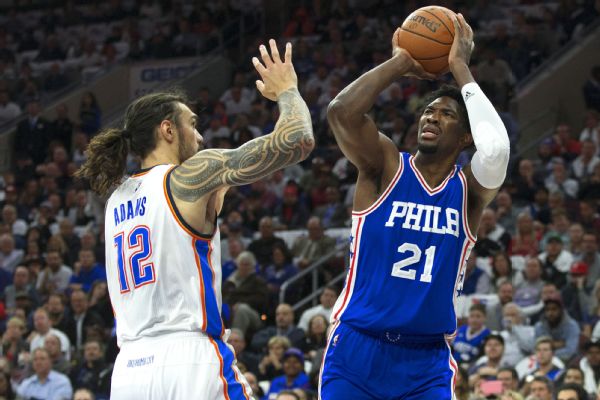 PHILADELPHIA -- Joel Embiid began the night as nervous as he has ever been. But by the end of his highly anticipated pro debut, Embiid was showered with chants of "Trust the process!" while already becoming the 76ers' go-to player.

Playing in his first regular-season NBA game after missing his first two seasons due to two surgeries on his right foot, Embiid drew oohs and aahs from a sellout Philadelphia crowd -- even on missed shots -- by flashing the versatile potential that made him the third overall pick in 2014 out ofKansas.

More important, though, was the fact that the 7-footer got up and was OK after taking a hard spill in the second half while fouled in transition. His fall drew a collective arena-wide gasp from the 20,487 who came to witness the start of the Embiid era.

Embiid kept playing, and he didn't disappoint, finishing with 20 points, seven rebounds and two blocks in a 103-97 Sixers loss to theOklahoma City Thunderon Wednesday. In 28 games with the Jayhawks, Embiid never scored 20 points in a game.

He played two minutes over his game restriction of 20 and accomplished his first personal goal of the season.

"Uh, finish the game healthy," Embiid said when asked what he wanted to see in his first pro game.

Following his first outing, Embiid was clearly appreciative of the outpouring of cheers he received from the win-starved Sixers fans, who cheered even when he missed his first shot (a 3-pointer). He heard their chants of "MVP" and thanked them on Twitter for sticking by him through the injuries.

It has been an emotional journey for Embiid and the Sixers, who have endured a historically bad rebuild that has seen a total of 199 losses over the past three seasons. The losses, though, have enabled the team to draft the likes of Embiid, Ben Simmons and Jahlil Okafor.

The Sixers drafted Embiid in 2014, but the raw center had to undergo two surgeries on his right foot before finally taking the court this season.

"There are times when I get emotional, like watching him today walk around in shootaround and you see [all the arena] seats with white shirts placed on them, and it's opening night, and Joel Embiid is here," Sixers coach Brett Brown said before the game. "I lived every second of that journey with him, good times and bad, and for him to arrive now here ... knowing the work and uncertainty and the emotional strain that he went through, wondering if he would play again, to see him arrive, it is a special night."

The Sixers wanted to restrict Embiid's playing time to five segments of four minutes each and Okafor's total minutes to 12 for the game to maintain the health of their two young big man pillars, with fellow talented prospects Nerlens Noel and Simmons out with injuries.

"If you went into my office, you would see it is a Rubik's Cube," Brown said of his minutes plan. "I need an abacus."

The way Embiid looked in his debut, opponents might need a complicated formula for figuring out how to stop the talented big man in the years to come. Embiid made 6 of 16 shots and 7-of-8 from the free throw line. He had four fouls and four turnovers but displayed all of his potential, including putting the ball on the floor like a small forward, hitting a 3-pointer and a dizzying array of back-to-the-basket moves.

Embiid drew cheers on a missed shot when he pump-faked a 3 before putting the ball on the floor, crossing over, backing in a defender, shaking his back and showing the ball with one hand, like Hakeem Olajuwon used to do. It might have been the most exciting miss Philadelphia has seen in years.

"We have been through 52 players in my three years, not including the ones that are still here," Brown said. "Only 11 are still in the NBA. Think of that."

Embiid, though, might have made fans appreciate the losses it took to get him and get to this point.

He scored his first basket to a roar on a 16-foot shake-and-bake turnaround jumper with 8:17 left in the first quarter.

Each time Embiid checked into the game, there was a loud applause. He made 1-of-3 from behind the arc, burying the first 3 of his career with 7:12 to go in the second quarter. By the early moments of the fourth quarter, Embiid stood at the free throw line and was serenaded with chants of "Trust the process!" by Sixers fans, referring to the mantra that became popular during former general manager Sam Hinkie's patience-testing rebuild.

Embiid then gave Philadelphia a glimpse of the future as the Sixers' go-to player. He showed no fear and what he can do with the ball while facing up against a defender in a tight game. Embiid drained a 14-footer over Steven Adams with 3:26 left to give the Sixers a 93-90 lead. With 50.7 seconds to go, Embiid knocked down another short jumper to tie the game at 97.

"We tried to get the ball to him a lot," Brown said. "To have somebody like Joel, where the mystery [of how good he can be] is solved, what do you do? You get him the ball, as much as you can."

Needing a basket to tie the game again, the Sixers went to Embiid, but he missed a contested drive to the rim. Embiid blocked Victor Oladipo, but Enes Kanter put back the miss to put Oklahoma City up four. Embiid drove the lane and scored on the next possession. But he was called for an offensive foul with 5.2 seconds left.

Embiid would have liked to have won his pro debut, but he knows how far he has come just to be able to play this game.

"You think about what you have gone through the last three years, having to get surgery, all the ups and downs," Embiid said. "But I try to stay away from [thinking about that]."

Joel Embiid flashes star potential in his delayed NBA debut
Joel Embiid scores 20 points in just 22 minutes as the 76ers lose his NBA debut 854 days after making him the No. 3 pick in the 2014 NBA draft.