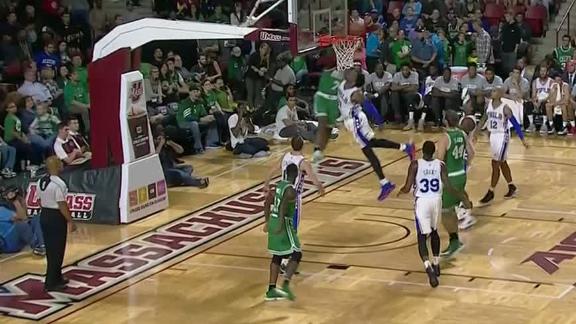 AMHERST, Mass. -- On the same day Philadelphia 76ers No. 1 overall pick Ben Simmons had foot surgery, former lottery pick Joel Embiid finally made his NBA debut after missing his first two seasons because of foot injuries. The 7-foot-2 Embiid scored six points, grabbed four rebounds and blocked two shots while playing 13 minutes in the Sixers' 92-89 victory in their preseason opener against the Boston Celtics on Tuesday.

"It felt great," Embiid said after the game. "It was one of my goals. I'm happy I crossed it off the list."

"I was pretty nervous," he admitted. "I had trouble breathing, but once I got that first bucket, everything slowed down. I started seeing the game easier."

Philadelphia coach Brett Brown said prior to the game that he planned to limit Embiid to about 12 minutes. All of Embiid's minutes came in the first half.

"For his first game, when you watch him, you can see what can be with him," Brown said.

Embiid missed his first three shots from the field, then scored on a turnaround in the lane with 1:18 remaining in the first quarter. He then knocked down a 23-foot jumper with one second left in the quarter. He made a pair of free throws in the second quarter.

"Offensively, I was pretty bad," Embiid said. "I've got to work on a lot of stuff. But I thought I was pretty good defensively."

Embiid's most recent game came back on March 1, 2014, when he was a freshman at Kansas. He was selected with the third overall pick in the 2014 NBA draft, but he missed the past two NBA seasons because of foot injuries.