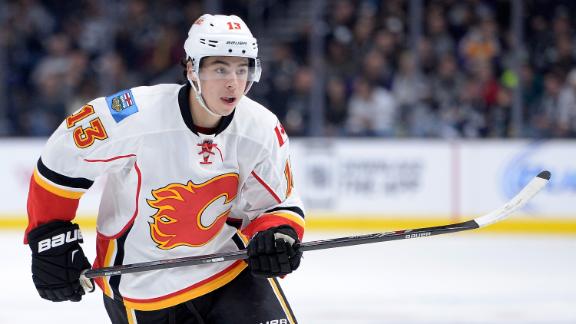 Calgary Flames rookie Johnny Gaudreau, who has 13 goals and 19 assists this season, is seeking to patent and trademark "Johnny Hockey" in both the United States and Canada, TSN reported.

The 21-year-old Gaudreau, who won the Hobey Baker Award as the nation's top collegiate player at Boston College, is seeking to use the moniker on sports equipment, apparel and accessories. The patent and trademark applications are pending, TSN reported.

Cleveland Browns rookie quarterback Johnny Manziel, after winning the Heisman Trophy at Texas A&M, filed for the trademark to "Johnny Football" with the U.S. Patent and Trademark Office in 2013.

"We were concerned that people were going to abuse the Johnny Hockey name, coming out with Johnny Hockey shirts and stuff, and we wanted to make sure that did not occur," Lewis Gross, Gaudreau's agent, told TSN. "We felt that Johnny was going to be a special player, and if he takes off the way we felt he could, he has the potential to have endorsement opportunities that could be very valuable.

"He's still just a rookie and want him to focus on playing. ... Johnny Hockey is just a name to us. When you watch Johnny play, there's something unique and special. All you hear about is his size, but he does things on the ice so electrifying."

Gaudreau was the NHL Rookie of the Month for December.

Gaudreau, who ranks 10th in the NHL in on-ice shooting percentage (12.1 percent), remains in the hunt for the Calder Trophy, given to the NHL's top rookie. He also has been invited to participate in the NHL All-Star Skills Competition on Jan. 24.