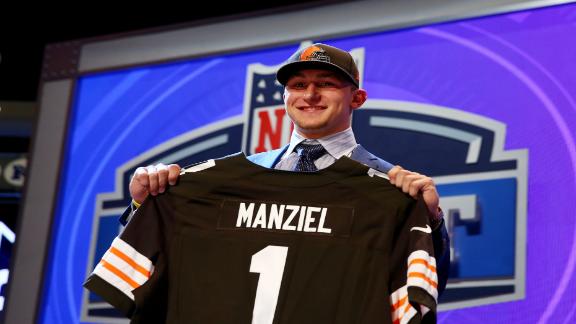 BEREA, Ohio -- Johnny Football became Johnny Free Fall, and now he's headed to Cleveland, where the Browns are well aware of what awaits them in terms of attention and buzz.

After patiently waiting for nearly three hours, Johnny Manziel finally was selected by the Browns, who moved up four spots to take him with the 22nd pick in the NFL draft's first round.

The Browns believe the hype surrounding Manziel and his reputation off the field will not be problems.

"The shot in the arm that I would rather give this organization is in the fall," first-year coach Mike Pettine said Thursday night. "We talked about that before. Talk is cheap. Hype is exactly that."

The Browns made the deal with the Philadelphia Eagles, who received the 26th overall pick and a third-round selection from Cleveland.

It was the third trade in Thursday's first round that involved the Browns, who began the night with picks at Nos. 4 and 26. Cleveland traded the fourth pick to the Buffalo Bills, who moved up five slots to nab receiver Sammy Watkins.

The Browns also traded up one spot, from ninth to eighth in a deal with the Minnesota Vikings, to pick cornerback Justin Gilbert with their first selection of the night.

"We took the opportunity to take the players that we had in the order we had them ranked," general manager Ray Farmer said. "When the opportunity presented itself, we took those liberties."

Those deals were overshadowed by Cleveland's move to take Manziel, the polarizing 2012 Heisman Trophy-winning quarterback whose agonizing wait to be drafted created a stir on Twitter.

Even the NFL's official Twitter account commented on Manziel's nationally televised wait. After the Dallas Cowboys became the 16th team to pass on Manziel, the league tweeted: "#SadManziel???"

Manziel's wait was the perfect fodder for social media, with the hashtag "BeforeManzielGetsDrafted" trending on Twitter.

The reaction in Cleveland was immediate.

Within 25 minutes of Manziel's selection, the team had sold 200 season tickets and had 300 renewed.

A team vice president tweeted that the phones were ringing off the hook, and another tweeted a photo of the Manziel jersey now available at the team shop.

- Cleveland Browns (@Browns) May 9, 2014"We're thrilled that the city of Cleveland is abuzz about football," Pettine said. "We want that feeling to persist, and we want it to go deep into the fall."

According to ESPN Stats & Information, the Browns -- having picked Brandon Weeden with the 22nd overall pick in 2012 -- became just the third team in the common draft era to select two quarterbacks in the first round in a three-year span.

Weeden was released by the Browns this offseason and picked up by the Cowboys.

Cowboys owner/general manager Jerry Jones said Manziel never really was a consideration for his team. The Cowboys used most of their 10 minutes considering offers to trade down.

"There's no way any quarterback comes in here and beats out Tony Romo," Jones said. "As you well know in here, Romo -- by contract as well as by commitment -- is going to be the quarterback for the Cowboys for several years to come. There's no moving around it. I don't care who you draft."

Jones said he was surprised that Manziel was still around and that the prospect of getting Manziel didn't lead to a "bonanza" of trade offers.

The marketing-savvy Jones turned down a chance to get Manziel under one of the biggest brands in sports -- in the quarterback's home state, no less -- without so much as a second glance. Or so he said.

"The idea of flair, flash, show business ... all that kind of thing was never a consideration and we never discussed that type of thing," Jones said.

The Browns say that while they will discuss the best way to handle the hoopla, they look on Manziel as a talented player who has to earn a job.

Manziel said he would remember the teams that did not pick him.

"I'm going to take a very aggressive mindset into it," Manziel said. "I'm going to work extremely hard to get what I want, and I know what that is. I want to win, and I want to be successful. The amount of time I put in and the heart I put into this, which I know I'm capable of doing, will tell the tale."

Pettine said Manziel has the "it factor at an extreme level." He described Manziel as ultra-passionate and ultra-competitive. But he said Manziel will have to earn his playing time and will not be given it.

"It'll be a competition," Pettine said. "I meant that when I said it. I don't think you can hand jobs to people when they come in."

Farmer said he reached out to Brian Hoyer, a Cleveland native who had said he'd consider the starting job his until he was told otherwise. Farmer said Hoyer's reaction was to say "bring him on."

Despite standing at just under 6 feet tall, Manziel was one of college football's most dynamic players during his two-year career at Texas A&M.

Manziel had a historic 2012 season with the Aggies, culminated by becoming the first freshman to win the Heisman.

He also became the first freshman in NCAA history to pass for 3,000 yards and rush for 1,000 yards in a season.

Manziel also was productive as a sophomore, passing for 4,114 yards and 37 touchdowns while rushing for 759 yards.

Manziel Selected By Browns At No. 22
The Browns drafted Johnny Manziel with the No. 22 pick.

Manziel: 'Very Excited'
Johnny Manziel talks to Suzy Kolber after being selected by the Cleveland Browns with the 22nd pick in the NFL draft.

Manziel Lands With Browns At No. 22
Cleveland traded up to stop the Johnny Manziel freefall. Todd McShay looks at the busy first round for the Browns and what this means for their offense.