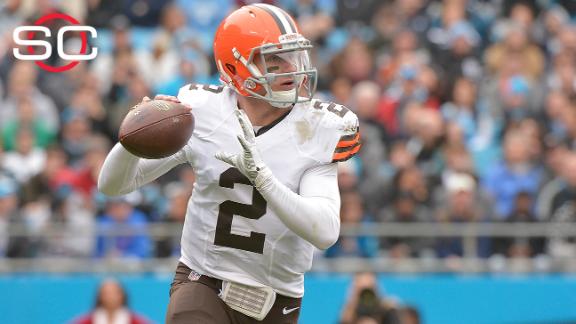 BEREA, Ohio --Johnny Manziel took all the snaps with the second team at the Cleveland Browns' first offseason practice on Tuesday.

Manziel clearly is ahead ofThaddeus Lewisand Connor Shaw on the Browns' quarterback depth chart, but behind Josh McCown, as he enters his first competitive work since ending a 10-week stay in a treatment facility.

Coach Mike Pettine said the decision on Manziel was a "coach's decision based on how the guys came out of Phase II" of the offseason program.

That McCown is the starter is not surprising. Pettine had said that McCown would enter OTAs -- and probably training camp -- as the No. 1. But at rookie camp Pettine referred to Manziel as one of three guys sharing reps at the backup spot.

In the offseason practice, Manziel was No. 2 -- and not just on his jersey.

"He's been very engaged in the meetings and it's good to see a lot of stuff carried onto the field," Pettine said. "Not just him, but the entire quarterback group."

Pettine added, though, that the practice was sloppy, which is not unexpected for the first offseason on-field work between offense and defense with a new coordinator, system, quarterback, receivers and tight end.

Manziel, who did not speak to the media, threw the ball well with good velocity --"He can really spin it," McCown said -- but had tough moments in seven-on-seven and 11-on-11 drills.

One pass in seven-on-seven was intercepted -- a major no-no -- and another knocked down at the line. He and McCown both threw a fair number of checkdowns, and Manziel also had a fumble as he dropped the ball as he rolled left.

Pettine continued to emphasize bringing Manziel along slowly, as he is not too far removed from his stay at the treatment facility. Pettine said Manziel has been doing the right things, but stopped short of saying he's seen a major change in the quarterback.

"I wouldn't say it's anything dramatic," Pettine said. "He's a little more focused -- and this is something he's said -- you have to prove it every day."

"For Johnny it's one day at a time," McCown said. "He's just got to keep stacking good days. I would say to this point from everything I've seen, every day has been a good day."

Manziel back on the field
Browns coach Mike Pettine discusses QB Johnny Manziel, who was back on the practice field for the first time since he left rehab.