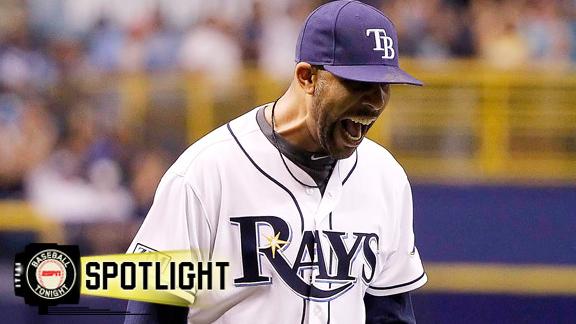 ST. PETERSBURG, Fla. -- Red Sox left-hander Jon Lester said Friday night that he would not be surprised if the team elected to trade him before Thursday's deadline, but said he still would be open to re-signing in Boston as a free agent.

"Yeah, why not?'' Lester said when the trade-then-sign scenario was proposed to him after Friday's 6-4 loss to the Tampa Bay Rays. "I mean, this is what I know, this is what I love. Like I've said many times, this is where I want to be. If they trade me, I completely understand.

"Like I said, no hard feelings. I know what they have to do for their organization. If that involves me, so be it. If it doesn't, I'll keep running out there every five days, pitching, and like I said, hopefully November we'll get something done.''

Lester, pitching against the Rays' David Price in a matchup of the American League's top lefties Friday, left after six innings with a 3-2 lead, having thrown 110 pitches. He allowed six hits and two runs -- both coming on a Desmond Jennings home run in the fifth -- walked one and struck out seven.

Price, however, emerged the victor when the Rays scored four runs in the seventh off Red Sox relievers Andrew Miller and Junichi Tazawa, inflicting most of their damage on the Japanese right-hander. Lester, who is 10-7 with a 2.52 ERA, came away with just his fourth no-decision in 21 starts.

Scouts from at least 17 teams were in attendance Friday night, as both Price and Lester have been mentioned as possible trade targets. Many other Red Sox players (Jake Peavy, Jonny Gomes, Stephen Drew, Miller, Felix Doubront, Craig Breslow, Burke Badenhop, Tazawa and even Koji Uehara) also have been the subject of trade talk with the defending World Series champions dropping out of playoff contention.

Until recently, the focus with Lester had been on whether the Red Sox intended to re-sign him before he became a free agent at the end of the season. The story by now is a familiar one: Talks broke off in spring training after the Red Sox made a four-year, $70 million offer perceived as far below market value by Lester and his agents, Seth and Sam Levinson.

At that time, Lester said he preferred to delay any further negotiations until after the season. According to sources, the Red Sox made overtures to Lester and his agents around the All-Star break but no offer materialized, Lester maintained his no-talks stance, and earlier this week, owner John W. Henry and CEO Larry Lucchino both came out publicly reiterating that they were respecting the lefty's wishes not to talk further at this time.

What went unsaid, of course, is the likelihood that the Red Sox did not press the issue because they were unprepared to make an offer more commensurate with the going rate for top-of-the-rotation pitchers, such as the six-year, $144 million extension signed by Phillies left-hander Cole Hamels in July 2012. Tigers right-hander Max Scherzer, who like Lester is eligible for free agency after the season, rejected those terms when offered them by Detroit this spring.

In an interesting twist, the Red Sox have been linked to Hamels as a potential alternative, since he has four years and roughly $90 million left on his deal, which in length and dollars appears more in line with the parameters set by team ownership.

The Phillies had a top scout here Friday night and, according to ESPN.com's Jayson Stark, had scouts tracking Double-A Portland, where the most coveted Red Sox prospects are catcher Blake Swihart and left-hander Henry Owens.

The Red Sox have long had an interest in Lee, but he just missed two months with a strained tendon in his pitching elbow and was unimpressive in his first start back Monday. Yet, for a relatively short-term return, he wouldn't figure to cost top prospects, especially since the Phillies would be getting out from under his salary.

Several scouts here Friday, speaking on the condition of anonymity, said that if the Red Sox cannot re-sign Lester, they should consider trading him, because of the potential high return. One of Boston's biggest needs is outfield help, and contenders such as the Cardinals (Oscar Taveras) and Dodgers (Joc Pederson) both have major league-ready outfielders in their systems. Still, it would be hard to see prospects of that caliber being involved in a deal that would essentially be a two-month rental.

Trading Lester is "not a focus right now," one Red Sox source said Friday night, but none of the team's decision-makers were ruling out the possibility of a trade, either publicly or privately.

Lester, meanwhile, was candid in discussing the possibility, especially as the Red Sox's hopes of climbing back into contention faded with a fourth straight defeat.

Lester alluded to the fact that as a young pitcher, he was twice a prominent piece in potential trades: once when the Red Sox were prepared to include him with Manny Ramirez in a trade for Alex Rodriguez of the Rangers, and again in a potential deal for Minnesota left-hander Johan Santana.

"I've been there,'' he said. "I've been traded. I've been given back [when the A-Rod talks fell through]. I don't think anything, especially in Boston, can surprise you.

"Like I said, we all understand where we're at. We understand it's a business. Ben [Cherington, the Red Sox's general manager] and this ownership have to do what is right for this organization. If that means, whoever it may be, is traded for prospects, other guys, whatever, that's all part of the business side.

"If that's where they want to go with it, that's fine. No hard feelings. Hopefully come November, I'll be right back here and don't have to worry about it.''

The risk in the Red Sox trading Lester, then making another run at him as a free agent, is that they will sacrifice one of their biggest selling points to the pitcher -- the chance to be with one club his entire career. Once he goes to another team and perhaps tastes success there or determines that he can be just as comfortable, the allure of returning to the Red Sox might not be as great.

The other risk, of course, is that once a player enters free agency, the highest offer usually trumps all other considerations.

"I'll take the ball every five days, whether here or somewhere else. Obviously, I'd like it to be here. If I'm here, I'll continue to grind it out every five days and give them the best chance to win," Lester said.

"After tonight, I'm worried about Wednesday [his next scheduled start]. That's all I can worry about. I can't worry about trade deadlines, contracts; I can only worry about in five days. If I'm pitching in this uniform, great.''