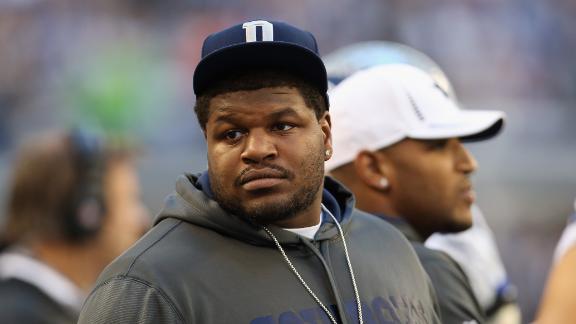 DALLAS -- Former Cowboys tackle Josh Brent will spend at least 45 days in rehab after his release from jail in the drunken-driving death of a teammate, and a return to his former team remains a possibility.

Brent was released Sunday after serving about five months in jail for the wreck that killed Cowboys practice squad linebacker Jerry Brown, his close friend and college teammate at Illinois. A judge ordered Brent to spend at least 45 days in a residential facility for substance abuse as part of his sentence of 10 years of probation.

Brent avoided prison time at trial -- he faced up to 20 years -- and at age 26, he presumably could seek to re-enter the league. His agent, Peter Schaffer, declined Monday to discuss Brent's pro prospects.

"It's up to the treatment professionals as to what's best for him, and he will do whatever they think is best," Schaffer said. "Nothing else matters right now."

Brent and Brown were headed home from a nightclub in December 2012 when Brent lost control of his Mercedes and crashed on a suburban Dallas highway. Officers arriving at the scene saw Brent trying to pull Brown's body from the wreckage.

Tests showed Brent's blood alcohol level was 0.18 percent, more than twice the state's legal limit for drivers. A prosecution expert estimated that the 320-pound lineman would have needed to have as many as 17 drinks on the night of the crash.

Brent did not play after the crash and announced his retirement from the Cowboys before the trial. League spokesman Greg Aiello said Monday that Brent can apply for reinstatement through the office of NFL commissioner Roger Goodell, who must also consider whether to discipline Brent under the league's personal conduct policy.

As a possible precedent, Goodell suspended Donte' Stallworth without pay for the entire 2009 season after the wide receiver pleaded guilty to a DUI manslaughter charge in Florida.

While acknowledging that the league will have "a big say" in Brent's future, Cowboys executive vice president Stephen Jones said recently that the team had not ruled out his return. Team executives and players have stood by Brent after the crash, with the support of Brown's mother, Stacey Jackson.

Brent was starting in place of the injured Jeremiah Ratliff at the time of the crash and had 31 tackles in 39 games over three seasons in Dallas.

Dallas County prosecutors have said they won't object to Brent's attempting a comeback as long as he doesn't violate his probation. Brent was jailed briefly before trial after testing positive twice for marijuana. His probation conditions are expected to include restrictions on drug use and travel.