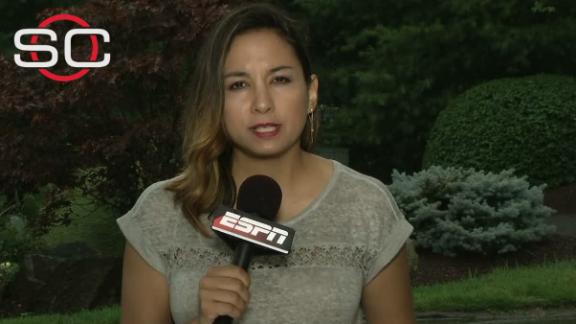 FOXBOROUGH, Mass. -- One day after taking himself out of practice in frustration and having his surgically repaired left foot examined on the sideline, New England Patriots wide receiver Julian Edelman returned to practice Wednesday.

Edelman wasn't a full participant in the rainy practice, which was held in light shoulder pads and mostly at a half-speed pace, but his presence confirmed Tuesday's preliminary diagnosis that he had avoided a serious injury.

He planted hard on his left foot and appeared to have no issues during practice drills in which receivers ran routes. He later retreated to a lower practice field as the practice continued and ran full-speed sprints.

Edelman didn't address reporters after Wednesday's practice, which marked the second day in a row that the Patriots worked with the New Orleans Saints in advance of the teams' preseason opener Thursday night at Gillette Stadium.

On Tuesday, when Edelman took himself out of practice, his reaction of throwing his helmet into the ground contributed to initial concern of an injury.

Edelman had undergone offseason surgery on his left foot after initially injuring it Nov. 15, in a game against the New York Giants. He missed the final seven games of the regular season before returning for the playoffs.