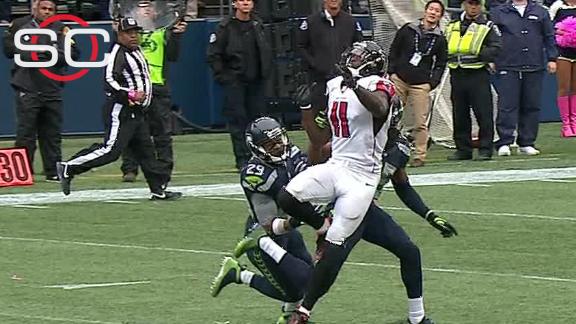 SEATTLE -- Atlanta Falcons receiver Julio Jones said there was no doubt Richard Sherman interfered with Jones on his team's final play in Atlanta's26-24 loss to the Seattle SeahawksonSunday.

Jones tried to make a catch deep down the middle on fourth-and-10 with under two minutes remaining. Instead, QBMatt Ryan's pass fell incomplete, allowing the Seahawks to seal the win. The Falcons were trying to to sustain the drive and set up a potential game-winning field goal attempt.

Jones was asked if he thought he was interfered with on the play.

"I do," he said. "Before I took off, [Sherman] grabbed my right side and spun me around before I jumped up. But it was just a missed call. It's over with. It's done. We're on to the next right now."

Sherman said he thought the non-call was in line with how the game was being officiated.

"I mean, I thought there was interference on offense on a few plays, and they didn't get it," Sherman said. "So it was just one of those games. They let us play."

Asked if he thought he got away with one, Sherman said, "No, I feel like we won the ballgame."

Jones said he saw no need to plead his case with the officials in case the situation arises again.

Ryan, who rallied the Falcons from a 17-3 halftime deficit, was asked what he saw.

"I haven't seen the replay, but our job is to play,'' Ryan said. "That's all you can focus on. I thought Julio did a hell of a job going up and being aggressive to try and make a play on the ball."

Falcons coach Dan Quinn opted not to lash out about the non-call, though he was visibly irate when it occurred.

It wasn't clear whether the Falcons would send the play in to the league for clarity.

"We'll go back and look at it,'' Quinn said. "From the sideline vantage point, we thought it was a 50/50 ball that we certainly had an [opportunity] to go get. It never comes down to one play. I thought we had some opportunities in this game to capitalize on, so I'm not going to comment regarding the foul or not on the last play.''

Information from ESPN's Sheil Kapadia was used in this report.