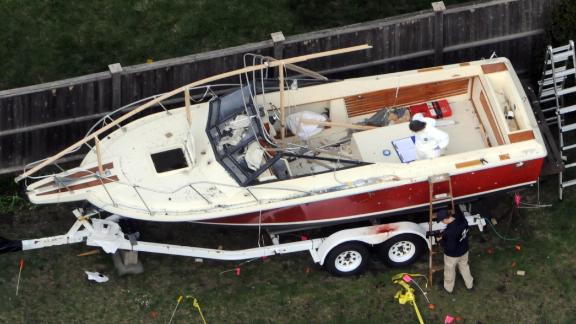 BOSTON -- Jurors in the trial of Boston Marathon bomber Dzhokhar Tsarnaev on Monday visited the bullet-riddled boat in which he was captured days after the deadly blast.

The jurors walked around the outside of the boat and peered inside. Tsarnaev, flanked by three attorneys and U.S. marshals, watched impassively from a table about 50 feet away.

The red and white boat is covered with more than 100 bullet holes marked individually with small pieces of white evidence tape. One of the boat's two front windows is shot out almost completely, with just one shattered piece of glass remaining.

Jurors walked around the boat, taking notes, and then went two at a time onto a lift so they could look inside the vessel, which was on a trailer.

Inside the boat, called the Slipaway II, they could see the note Tsarnaev wrote in which he denounced the U.S. for its wars in Muslim countries. The note, written in pencil, is speckled with at least 10 bullet holes and stained with long streaks of blood.

Tsarnaev's lawyer admitted during opening statements that her client participated in the bombings and the later crimes, but said his slain older brother, Tamerlan, was the mastermind who recruited the then 19-year-old Dzhokhar to help him.

Prosecutors say Tsarnaev was a full and willing participant. Now 21, he faces the possibility of the death penalty if convicted.

The same jury that decides guilt will decide whether he receives life in prison or the death penalty. Three people were killed and more than 260 injured in the attack.

The trial began its third week on Monday. It had been expected to last three to four months but is moving faster than anticipated, largely because the defense has not cross-examined many witnesses.

The boat is considered evidence and is impounded by the government. The trial judge ruled that its location could not be revealed to ensure the security of jurors and the defendant.