'Just keep trolling:' Enes Kanter has no plans on backing down 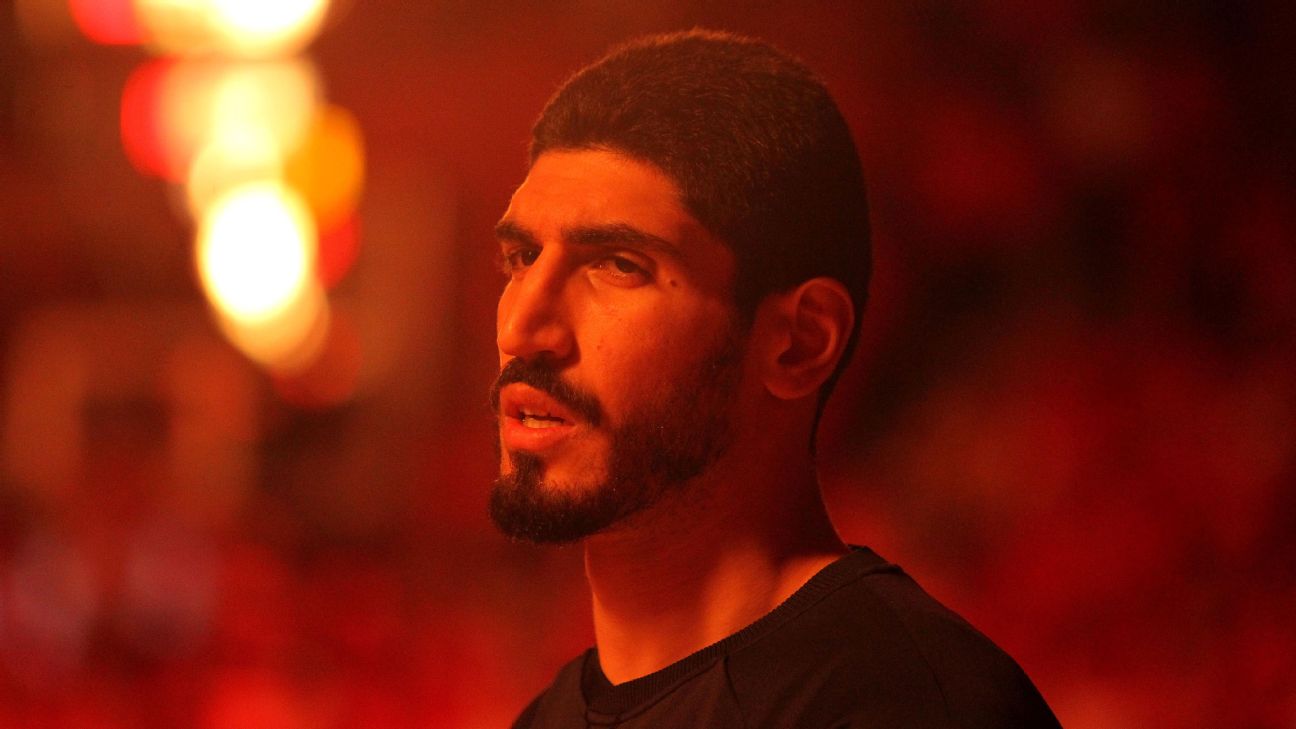 It's been almost a year sinceEnes Kanterstood in this tiny gym in this tiny town in Oklahoma. It's the kind of gym with a beige plastic tile floor and hand-printed inspirational quotes on the walls.

It's also the heart of a 160-acre property in Guthrie called Peppers Ranch, a foster-home community initially founded to aid abused and neglected young boys.

Kanter is back at the gym at Peppers Ranch on a promise. He was here on Sept. 23, 2017, when he got the call he'd been traded to the New York Knicks in a deal for Carmelo Anthony. Kanter had to leave abruptly -- not before he gathered the kids around for a "1-2-3, Knicks!" chant -- but made the promise he'd come back.

And now he's back, on a steamy summer day in Oklahoma, putting on a one-day basketball camp for the the community. He'll play games, sign basketballs, answer questions and pick up kids to help them dunk.

Then, after briefly returning to his downtown OKC hotel room, Kanter will head to nearby Edmond to put on another free camp, with about 700 people showing up. There were so many sign-ups that it crashed the online system. The next morning? Kanter is at it again in the northeast corner of the state in Poteau.

It's how the summer goes for Kanter, bouncing around towns -- He was in Des Moines doing a camp, Houston, St. Louis -- mixing in offseason workouts with outreach. Maybe it's continental cabin fever, trapped inside the United States without a valid passport to travel to popular vacation spots like Cancun or back home to Turkey, where he's wanted as an alleged terrorist.

Kanter is a follower of Fethullah Gulen, an exiled cleric who was blamed for a failed coup attempt in 2016. Kanter's father, Mehmet, has been arrested twice and in June was indicted after being charged by the Turkish government with "membership in a terror group."

Kanter has a lot of beefs in the NBA -- mostly just for fun -- but a very real one with the president of Turkey, Recep Tayyip Erdogan, someone he's called "the Hitler of our century."

Kanter isn't shy about politics, and isn't afraid to label the 2016 coup attempt as fake. He sees Erdogan as a dictator who's persecuting his people and, at the risk of his family's well-being and his own life, he's not going to be quiet about it.

But then again, that's kind of how Kanter is about everything.

Before he took off in a car for Poteau, he sat down with ESPN.com over breakfast and shared his thoughts on LeBron James, the Golden State Warriors, why he likes to troll and why he's not backing down from his stance on Turkey.

OK, so what's your big problem with LeBron?

With LeBron, it was weird because when I was with the Thunder I remember watching games, highlights when the Cavs were blowing out the Knicks at MSG. And then they started playing the "bottle flip" game. I was like, "This is disrespectful, man ... this is messed up."

And then it was the first game I was with the Knicks and then he came and before the game he said we should've drafted Dennis Smith Jr. And not just me, but most of our guys felt like it was disrespectful to Frank [Ntilikina] and we actually sat down with Frank and talked to him and said, "Hey you gotta step up for yourself, man."

Then I was in the game and they were pushing each other and I'm like, "This is a 19-year-old kid against a 260-pound dude. This is not fair." So I get in there and we were face-to-face and we trash-talked a little bit. After the game I called him "queen" or "princess" or whatever.

But I would do anything to take his focus away, distract him. People ask me, "Does it work?" No it does not work. But I'm trying.

Do players ever chirp at you about your Twitter comments?

Actually they love it. They'll come up and say "We love your Twitter game. Just keep trolling, keep doing what you do." But I think it's just fun. You do stuff like that, the league hates it, I guess, but the fans love it. It's the fun part of the game.

So you said the league hates it ... like when you posted a picture of Adam Silver in a Warriors uniform?

Yeah, the Adam Silver thing. I remember I tweeted that picture and five minutes later I sit down and think, "Man, I'm gonna get fined." I texted the Knicks PR guy and said, "Am I getting fined?"

What do you think about the Warriors?

I've got no problem. They didn't do anything illegal. You look back in the day with what happened with Chris Paul, the league didn't let him go to the Lakers. Now, I feel like they've kind of ruined the league a little bit because most people say, "Oh, Golden State is going to win anyway, so I'm not going to watch the games anymore." But the ratings are pretty good, though. Still, the fans are wondering what's going on.

So what do you mean by "ruined the league?"

East and West, look at the East. East is like AAU teams, and the West is like, the league.

You were trying to keep people on their toes when you were deciding to opt in or not. Were you just messing with people or were you really thinking it over?

Come on, you really didn't know?

I swear. The night before I went to my friend's house, I ate dinner and I was coming back to my house in an Uber and I was so bored. So I posted the deer emoji, and five minutes later I deleted it. On purpose.

So everybody was talking about it. I was like, "This is going viral, this is crazy."

So that was just you trolling the media?

What's the deal with you and Kevin Durant?

With Durant, of course there was a beef with [Russell] Westbrook when he came back [to Oklahoma City]. In the end I understand it's a business. This dude went [to Golden State], and in two years he made two All-Stars, two Finals MVPs and two championships. I think our problem with [leaving] the Thunder was how he did it. I don't think he'll ever get the respect he wants because of how he did it.

Speaking of, do you have any burner accounts?

I actually don't. They banned my Twitter in Turkey so I opened a second one, and they banned that one, too. So I was like, "OK, never mind, I'm not going to worry about that."

So let's talk about Turkey a little. What's going on with that situation right now?

I follow the news. Because if anything happens to my family or my dad, it's gonna be on the news.

Scared? Obviously it's scary because it's jail, man. But even if they give him 15 years, I don't think it'll be 15 years because I don't think the president will be there that long, and I hope not live that long. We'll see, man. We're just waiting.

What about you personally?

No, because I know in America they can't do anything. But anywhere else -- I had a camp in Canada I had to cancel, or I was going to go to Norway for a freedom forum, and I canceled it. Because anywhere outside of the U.S., it can be very dangerous. I can't live my life like that, paranoid about what's going to happen. I'll go to Times Square and hang out, or walk around in New York. If it happens, if something happens, it's gonna happen.

Do you have security?

The Thunder were really good at it because everywhere I went they sent security guards with me. With New York if I need it, I call them up and they'll come.

The Knicks play a game in London next season. Are you going to be able to go?

I have no idea if I can play or not. Or might I get traded, you never know. It's a perfect salary there ... (he stops himself and smiles).

What could happen if you went to London?

What would happen if you got sent back to Turkey?

That's the last time you would've heard from Enes Kanter.

What do you mean?

They wouldn't put a gun to my head and kill me because they'd get so much criticism, but they would do something. Get me in a car accident. Or maybe poison something.

Does it make you think about toning it down a little on social media?

People have been asking me that for a while, saying, "Why are you still talking, with your family there? Just stop talking and live your life." But my dad is just one. I think there are over 140,000 people in jail right now because of what's going on. Turkey is the No. 1 country in the world, after the coup attempt in July 2016, about putting journalists in jail. No. 1 in the world. The most in the world. If you're putting journalists in jail then you have no freedom of speech. You're scared of something.

You're in the process of becoming an American citizen.

I've got my green card so I have to wait two or more three years to become a citizen.

So when that happens, are you going to see yourself just as an American?

When was the last time you were in Turkey?

It was cool. You get to see your family -- home-cooked meals are the best. You get to hang out with your friends, with your neighbors. It was definitely awesome.

Do you see a time where you will be able to go back freely?

Man, maybe in 10 years or so. Maybe when I'm done with the NBA. Maybe when I sign my last contract in the NBA and then I go.

When you go through your personal history, coming to the U.S. and you can't get on a high school team, then you go to Kentucky but can't play, then you're drafted but there's a lockout, then everything regarding Turkey and your family -- it sort of seems like you're a guy without a home.

I do feel a little homeless, because I have no country. When people ask me where I'm from, what should I say? Turkey? I'm not from Turkey, they don't want me there. They cancelled my passport. America? I'm not American. Switzerland? I was born there, but I'm not from there. So like, I guess I'll say Turkey because I was raised there?

There's obviously a strong connection to Oklahoma. Is the reason for that because it's the first place that felt like home in a while?

Yeah, because I remember from Day 1, not just the whole [Thunder] organization, but the people here, the fans, it was like home for me. Because I did not have a home.

All these summer camps and all the things you do, you kind of go above and beyond. Why do you make it a point to do so much?

You play basketball, you make a lot of money and then a lot of people are done from there. Just making money, playing basketball and that's it. When I'm done with my career I want to look back and say, "Man, I tried to touch as much as I could. I tried my best."

If I was a 9- or 10-year-old kid and an NBA player came and talked about anything, I would never forget that. 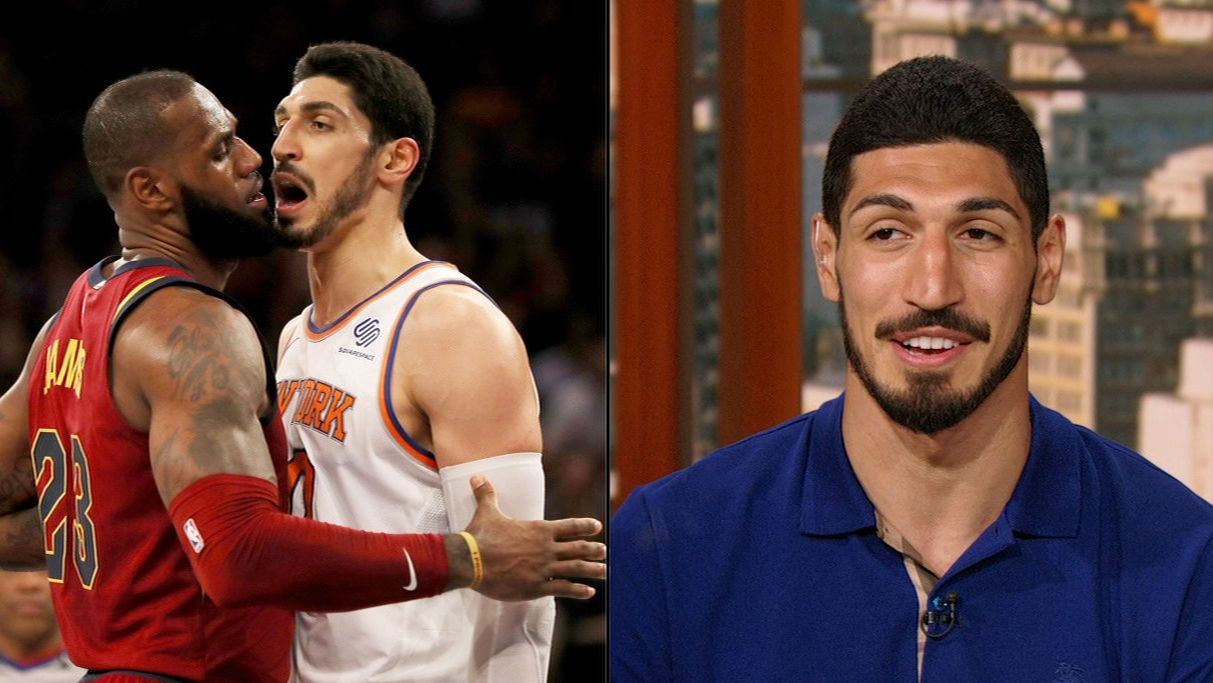