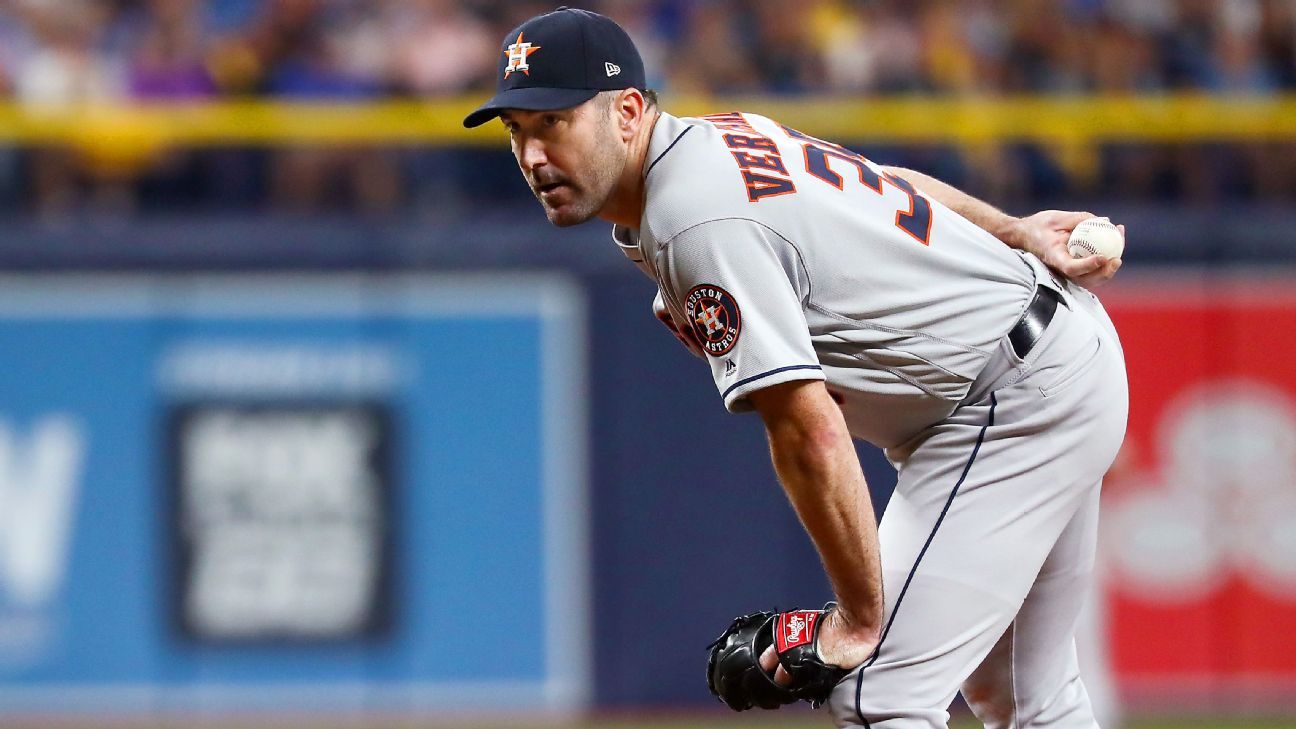 NEW YORK -- In a way, we've been here before. Many times. Close-out game. Justin Verlander on the hill. It's a sensation of eternal return and it usually ends badly for the opposition.

But not always: We're 10 days removed from Verlander's last chance to close out a series. Doesn't it seem longer than that? But you remember -- Verlander got the call to start Game 4 of the American League Division Series against theTampa Bay Rayson three days' rest. Which he'd never done before in full, back-to-back starts.

"He's one of the best pitchers in the world,"Houston Astrosmanager AJ Hinch said after tabbing Verlander the night before that outing. "No more complicated than that. He's ready, and it's his game."

And you remember what happened: Verlander gave up three runs in the first inning, coughed up bombs to Tommy Pham and Willy Adames, struggled with his control with three walks and spun an ineffective slider for 3 innings. He departed to a jeering Tropicana Field crowd and with the worst game score (33) of any of his postseason starts.

It was shocking to see. Verlander had three close-out wins before that night, with a 1.05 ERA in those outings. Then you remembered the short-rest factor, which Verlander gamely refused to use as an excuse, calling such narratives "low-hanging fruit." Maybe he's right. A sample of one tells us nothing.

With a little deduction, though, we can look at Verlander's overall record in close-out games -- the three wins, the 1.05 ERA before the short-rest game -- and conclude that one thing does not look like the other. And that is very bad news for the New York Yankees, who face Verlander with their season on the line Friday in Game 5 of the American League Championship Series.

"You just don't let off the gas," Verlander said before Game 4 on Thursday, an 8-3 Astros win that put the future Hall of Famer in position to close out a series for the fourth time in his career. "You just stay focused and try to do the best you can."

Hinch has talked repeatedly during the postseason about wanting to get every series over with as quickly as possible, to play no more games than necessary to survive and advance. There are so many benefits to doing so -- rest for the relievers, the chance to line up the starting rotation, a day off to allow position players to let nagging maladies heal. The chance to allow sportswriters on the postseason beat to get some sleep and find a decent meal.

The Washington Nationals are reaping those benefits as we speak and already were by the time the Yankees and Astros took an unplanned day off Wednesday because of a rainout. The Yankees are now hoping for a long, grueling seven-game ALCS because there is no other way forward for them. It's seven games or hot stove time.

"You need to flush what's already happened in a hurry because tomorrow's too important" is the way Yankees manager Aaron Boone put it after the loss Thursday.

The Astros, on the other hand, can end things Friday. They would then have three days off before the start of the World Series. Gerrit Cole would start Game 1 with more than enough rest. (Rust angle narratives!) Verlander would be in line for Game 2, with Zack Greinke going in Game 3 at Nationals Park. In other words, even though the Astros are a couple of days behind the Nationals per the calendar, they can enter the Fall Classic on equal footing, only with a bit less rust to knock off.

But that's next week. Hinch won't even look beyond Friday, nor will his players.

"We don't want to take anything for granted," Jose Altuve said, echoing his manager. "We want to make sure we win tomorrow. We're playing against a great team."

Well, the "next game is all that matters" line has been Houston's playoff mantra for years. Obviously, it has served the Astros well. In having Verlander lined up for Game 5 -- with a familiar, normal, healthful four days of rest under his belt -- Houston could hardly be better positioned to go for the kill. Not only do the Astros have one of baseball's best big-game pitchers lined up, they have now seen the higher-leverage arms of the mighty Yankees bullpen multiple times in the series. Of course, Hinch even underplays that factor.

"Seven-game series are always going to increase familiarity as the series goes," Hinch said. "But so are they. I'm bringing Joe Smith every game, Will Harris has pitched every game, [Roberto] Osuna has pitched. They're getting their clean looks at our guys too."

So before we write off the ALCS as a fait accompli, there are three sources of consternation to consider for the neurotic Astros fan:

1. It's Yankee Stadium. Not including wild-card games, this is the 70th Yankees postseason series. Only once have they lost three straight at home to end a series, and that happened 77 years ago. In the 1942 World Series, New York dropped three straight at home against the St. Louis Cardinals to lose in five games. This year's Yankees went 57-24 at home during the regular season. Not once did a team beat them three times in a row on their own turf.

2. The Game 6 conundrum. Hinch's myopic focus on the next game means that he simply hasn't entertained discussions of what he might do if he has to pick a Game 6 starting pitcher. On Wednesday, he said that the Astros internally had not even had the discussion because there was simply too much baseball left to play before that would come into play. He and his club were pointed in one direction: winning Game 4 and Game 5, rendering the Game 6 conundrum moot.

After the Astros blasted the Yankees on Thursday, Hinch's shortsightedness is clearly paying off. But if you're a fan, well, it's hard not to peek ahead and wonder: What about Saturday?

Greinke and Verlander are out. The Astros have not used a fourth starter thus far in the postseason, and if Verlander comes through again Friday, they'll get to the World Series without having to use one. But if the Astros lose, then it becomes dicey: Does Hinch stay in kill mode and bring back Cole on three days' rest? Like Verlander, it's something Cole has never done. Then again, as great as Verlander has been, Cole just seems to keep gathering momentum. Maybe the switch in routine simply won't faze a pitcher so hot.

If not Cole, then Hinch's only other option is a dreaded bullpen game, of sorts. He does have rookie Jose Urquidy, who started for him late in the season and was often effective. Urquidy would have a short leash -- thus the bullpen-game descriptor -- and veteran Brad Peacock would be among those likely to add bulk to the bullpen formula.

One thing that winning Game 4 accomplished: No matter what, the Astros will have three wins in the books if a Game 6 takes place. That makes saving Cole for Game 7 -- on normal rest -- a more palatable option.

This isn't Verlander's first rodeo, of course. He has faced the same team twice in a playoff series eight times. His ERA in the initial outings of those instances: 2.94. In the eight return engagements, Verlander's ERA actually has dropped to 2.84. Sorry, Yanks. That's who Verlander is.

"You don't want your mindset to change, whether you have a series lead or not," Verlander said. "Any game can swing on any moment and the series can swing on that moment as well. I guess you just don't let off the gas, you just stay focused and try to do the best you can."

The bottom line is that Hinch isn't concerned about any of this. He sees the end of this tunnel, the one that leads to the airport and the happy flight out of town and toward a soft landing in the 90-degree heat of Texas and three days of healing and preparation for Houston's second Fall Classic in three seasons.

"After the 27th out [of the clincher] is when I start to have immense confidence," Hinch said. "I had confidence in JV beforehand, that's why I announced that he was going to pitch Game 5. The 3-1 lead had nothing to do with it. I wasn't even really thinking about Justin. I'm not sure where he was."

Hinch might not look beyond tomorrow, but he knows he has possibly the generation's greatest elimination-game hammer rested and ready to go. He knows that if that plan falters, he gets another shot at closing it out on Saturday. All series, the Yankees have played under a looming cloud, knowing that to beat the Astros four times, you have to win a game started by Verlander or Cole.

With Houston's Game 4 win, it's no longer Verlander or Cole ... it's Verlander and Cole. That's a commanding position to be in for the Astros as they prepare for a third straight game in the hostile environment of the Bronx. It's not a bad launching pad for the penultimate step to a championship.

"I love the fact that we have JV on our side," Hinch said. "And he's going to set a tone tomorrow that hopefully leads us to the World Series." 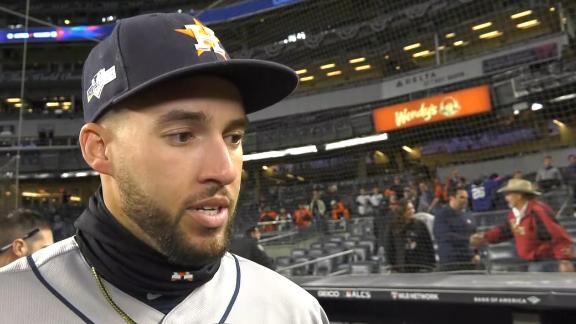