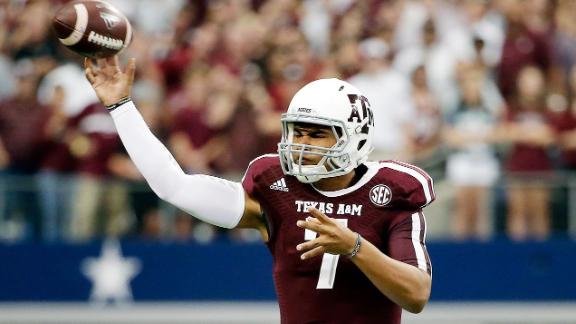 Texas A&M sophomore quarterback Kenny Hill has asked for his release from the school and is expected to transfer, sources close to Hill and the program told ESPN.com on Thursday.

Hill, from the north Dallas suburb of Southlake, could be looking to play closer to home. Big 12 champion TCU is a strong possibility for Hill, a source said.

Hill replaced former Heisman Trophy winner Johnny Manziel for the Aggies and surged to the forefront of the early Heisman race with a 511-yard, three-touchdown demolition of fellow SEC opponent South Carolina to open the 2014 season.

Soon after, Hill's parents filed for a trademark for the nickname "Trill," which Hill adopted in the wake of the revelatory performance.

Hill and the Aggies continued their march through September, preying mostly on weaker nonconference foes to land at 5-0 and earn a No. 6 ranking after the season's first month.

Then things changed. Texas A&M lost its next three games and five of its final seven. By November, Hill was replaced by freshman Kyle Allen, who led the team to wins against Louisiana-Monroe, Auburn and West Virginia to salvage an 8-5 finish.

When Allen took over, Hill was serving a two-game suspension for a violation of team rules and athletic department policy. Aggies coaches, though, insisted Allen would have taken over regardless of Hill's status.

Hill also was suspended for the final part of spring practice in 2014 after an alcohol-related arrest.

If TCU is Hill's destination, he will be forced to sit out 2015 in accordance with the NCAA's transfer rule. The timing could work out well for the Horned Frogs since breakout star Trevone Boykin figures to return next season for his senior year. Hill then would be eligible in 2016.

First-year coordinators Doug Meacham and Sonny Cumbie made Boykin a star in TCU's revamped offensive system. Boykin should be a Heisman favorite entering next season.

In addition to Allen returning for the Aggies in 2015, the school is expected to sign highly touted quarterback recruit Kyler Murray. Murray, an Elite 11 participant last summer, went 42-0 as a starter for Allen High in the Dallas suburbs.