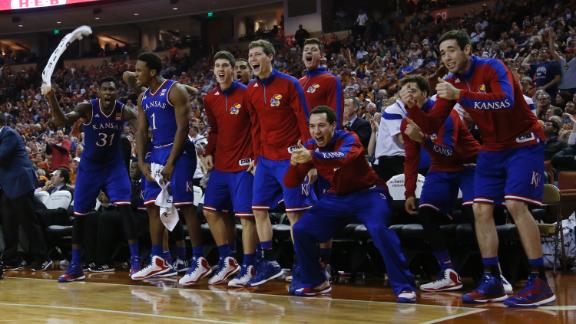 Kentuckystays in its season-long perch atop the AP Top 25 and has taken back one of its lost first-place votes from No. 2Virginia.

The Wildcats (19-0) were No. 1 on 64 of 65 votes cast Monday. They had been the unanimous choice for five straight weeks before losing a pair of votes to the Cavaliers (19-0) two weeks ago.

Kentucky and Virginia have been 1-2 for three straight polls.

Gonzaga stayed at No. 3, while Duke moved up a spot to fourth after coach Mike Krzyzewski earned his 1,000th career victory. Wisconsinclimbed one spot to roundout the top five.

No. 21 Georgetown, No. 23 Miami and No. 25 Butler were new to this week's poll, while Dayton, Seton Hall and Iowa fell out of the rankings.

With nine ranked teams losing last week, six of the last seven teams in the Top 25 have at least five losses. That includes a six-loss Butler team, while No. 24 Oklahoma (12-7) stayed in the poll after losing to two ranked opponents last week.

The Sooners are only the fourth team to be ranked with seven losses in January since the 1981-82 season, according to Stats.

Six teams moved up two positions, led by No. 9 Kansasand No. 12 Wichita State.

On the other side, No. 15 Iowa Statehad the biggest drop of six spots in a wild month in the poll. The Cyclones started January at No. 9, fell eight spots to No. 17, bounced up six spots the next week to No. 11 then two more last week to No. 9 before a loss to Texas Techdropped them again.

Andy Katz's 3-Point Shot: Weekly Awards
Andy Katz hands out awards for the team and player of the week, and he recognizes a couple big performances.

Which Conference Is King?
The Big 12 is strong from top to bottom, but the ACC has multiple Final Four contenders. Dino Gaudio and Matt Schick decide which is the best conference in America.

Kentucky Cruises Past South Carolina
Devin Booker led all scorers with 18 points off the bench as the No. 1 Wildcats beat the Gamecocks 58-43.

Virginia Edges Past Virginia Tech
The No. 2 Cavaliers closed the game on a 12-2 run to beat the Hokies 50-47.