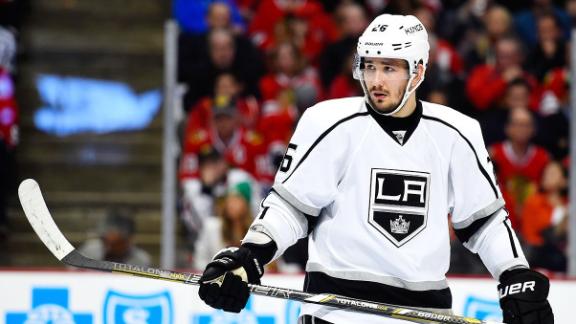 ESPN
By Katie Strang
The NHL has lowered the hammer on the Los Angeles Kings, fining the team $100,000 for violating the terms of Slava Voynov's suspension.

According to the league, the Kings allowed Voynov, who is currently facing a felony charge of domestic violence against his wife following an October arrest, to skate with teammates Tuesday during an optional practice.

The league stated in a release that, "Such activity is in direct contravention of the terms of the suspension levied Oct. 20, which permit Mr. Voynov to use club facilities and work with team personnel but prohibit his participation in any team-related functions or activities."

Previously, Voynov has skated on his own at the team's El Segundo, California, practice facility while working with associate coach John Stevens.

The suspended defenseman's presence on the ice Tuesday caused a firestorm on Twitter, though the Kings reportedly tried justifying the situation by explaining that he took the ice early for what was an "optional" team skate, though reporters on the scene said every member of the team participated.

"It was an optional skate and everybody went," coach Darryl Sutter said, according to lakingsinsider.com. "He was supposed to come out after with the injured guys right after practice. Everybody went today."

Apparently, the league was not pleased with this explanation, levying a significant fine against the defending Stanley Cup champions.

Last month, the league provided the Kings with some much-needed salary-cap relief and allowed Voynov's cap hit to come off the books.

Voynov pleaded not guilty to corporal injury to a spouse with great bodily injury. The 24-year-old Russian is next due in court on Dec. 15 for a preliminary hearing.