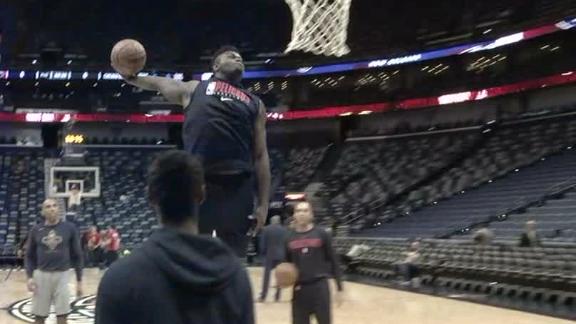 As the teams with the second-worst records in their respective conferences, the New York Knicks and New Orleans Pelicans have plenty in common. On Friday night, the Pelicans will hit the road and do their best to continue distinguishing themselves from the Knicks in the first meeting of the season between the clubs.

Both teams were off Thursday after playing Wednesday, when the Knicks continued skidding with a 128-104 loss to the host Utah Jazz and the Pelicans maintained their recent surge with a 123-108 win over the visiting Chicago Bulls.

The win was the seventh in 10 games for the Pelicans dating back to Dec. 18, when they snapped a franchise-record 13-game losing streak by beating the Minnesota Timberwolves.

Brandon Ingram continued keying the hot streak Wednesday, when he flirted with his second career triple-double by scoring 29 points, registering 11 assists and collecting eight rebounds. He is averaging 26.2 points per game over the last 10 contests, a span in which he's scored more than 30 points three times.

"As long as we win, that's all that matters," Ingram told Fox Sports New Orleans afterward. "(The chance at a triple-double) will come back again one day."

While there's still plenty of ground to make up in the chase for a Western Conference playoff spot -- the Pelicans enter Friday four games behind the eighth seed, the San Antonio Spurs -- there is plenty of reason for New Orleans to believe it can remain in the hunt.

Three of the Pelicans' last seven wins have come against teams currently occupying a playoff spot, and the three most recent losses were by a combined 16 points, including two to a pair of Western Conference contenders, the Jazz and Los Angeles Lakers.

In addition, No. 1 draft pick Zion Williamson, who hasn't played all season due to a knee injury, has resumed practicing with the team and is expected to return this month.

There's no such short-term optimism or help on the horizon for the Knicks, whose lopsided loss Wednesday capped a winless four-game Western Conference road trip that began with narrow losses to the Phoenix Suns and Los Angeles Clippers before they were outscored by a combined 54 points by the Lakers and Jazz.

"It was tough," Knicks forward Bobby Portis said afterward. "We missed (Morris and Randle) a lot today, but you can't give an excuse. You've got to play harder."

The losing streak undid the strides the Knicks seemed to be making under interim head coach Mike Miller, who directed New York to six wins in 10 games from Dec. 11 through Jan. 1, including a three-game winning streak that stood as the team's longest since Nov. 23-27, 2018.

The Knicks, who will enter Friday seven games behind the eighth-place Brooklyn Nets in the Eastern Conference, are 6-10 since Miller took over for the fired David Fizdale on Dec. 6.

Zion shows off his hops in practice
As he works towards coming back from injury, Zion Williamson throws down a couple of monster dunks during the Pelicans practice.
Report a correction or typo
Related topics:
sportsespnnew york knicksnbanew orleans pelicans
Copyright © 2020 ESPN Internet Ventures. All rights reserved.
More Videos
From CNN Newsource affiliates
TOP STORIES