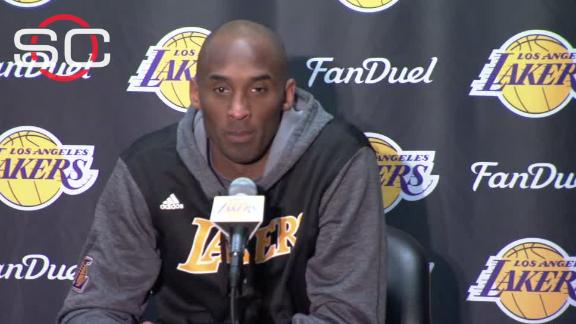 X-rays after the game came back negative, a Lakers spokesman said. Bryant said he expects to play in the Lakers' next game, Sunday against the Bulls in Chicago, his final game in the city where his idol Michael Jordan starred.

"Yeah, as far as I know, yeah," said Bryant, who finished with 25 points on 10-of-25 shooting in his final game against the Spurs. "[It] will be interesting to see how this responds [Saturday], but it's not fractured or anything."

The 37-year-old Bryant, whose previous three seasons were cut short by injury, dislocated the finger with a little more than two minutes left in the fourth quarter after chasing a rebound on a missed 3-point jumper.

Bryant said he slipped on the wet floor and put his right hand out to catch himself, "but I couldn't spread my palm fast enough, so my finger just jammed right into the floor and it just popped right out."

Bryant said he wasn't sure whether his finger could be popped back into place because "it wasn't a straight dislocation. It was out and to the side. It was kind of [shaped] like an S."

But Bryant went to the Lakers' bench, where longtime trainer Gary Vitti immediately popped the finger back into place. Bryant remained in the game, sinking his next shot, a 9-foot jumper.

Vitti is in his 32nd season with the Lakers and, like Bryant, is retiring after this season.

Longtime rival Tim Duncan, who was facing Bryant for the final time, said the finger episode was "him in a nutshell."

"We've played against each other for many years, and it's been great," Duncan said. "It's always a great game when you're playing against him. You always know you have to bring your A-game, because he's going to bring the best out of you.

"He's been a great competitor over the years, and he showed it tonight. He dislocated his finger in the last quarter, but he was still out there. He wants to play."

Kobe suffers dislocated finger in loss
Kobe Bryant discusses the extent of the injury to his middle finger on the right hand and clarifies that it is a dislocation not a fracture.
Related topics:
sportsespndislocatenbakobe bryantlos angeles lakersfinger
Copyright © 2021 ESPN Internet Ventures. All rights reserved.
More Videos
From CNN Newsource affiliates
TOP STORIES