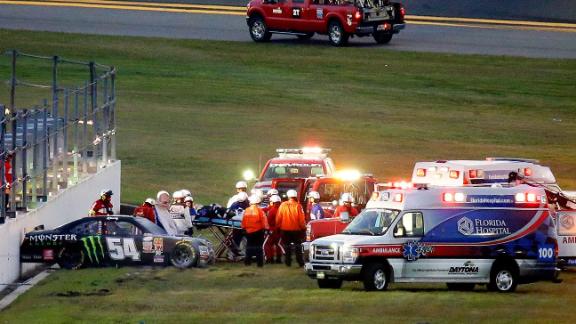 Busch needed assistance getting out of his car after it slammed into a wall that did not have an energy-absorbing steel-and-foam energy reduction (SAFER) barrier. His right leg was placed in an air cast before he was transported by ambulance to nearby Halifax Health Medical Center in Daytona Beach, where he underwent surgery Saturday night for a compound fracture of the leg. He also suffered a midfoot fracture in his left foot.

The team reported late Saturday night the surgery was successful and that Busch would remain hospitalized for observation.

Busch's wife, Samantha, offered an update on Twitter early Sunday morning: "In the recovery room with Kyle he's alert n chatting. Surgery went well. We thank you all for the support, prayers and love during this time."

Daytona track president Joie Chitwood said the speedway failed for not having SAFER barriers on all walls of the track and will start next week to have it installed "on every inch of our property."

Busch was supposed to start fourth Sunday in the Daytona 500. Matt Crafton, a two-time Truck Series champion who has never raced in the Daytona 500, will replace Busch in the No. 18 Toyota for Joe Gibbs Racing.

Busch will be out for an unspecified period of time. JGR officials said he was in good spirits Saturday night. It was not immediately clear whether he would need additional surgery.

"Kyle Busch is a key member of our Toyota NASCAR family and it goes without saying that everyone at Toyota and [Toyota Racing Development], U.S.A. has Kyle in their thoughts and prayers," Toyota vice president of marketing Ed Laukes said in a statement released Sunday. "Kyle is as tough a competitor as you'll find in motorsports and I'm confident he'll recover quickly and return to the track with an even greater passion to win. We know fellow Toyota driver Matt Crafton will represent not only Toyota, but Joe Gibbs Racing well in today's Daytona 500."

The accident occurred when Busch was racing directly behind JGR teammate Erik Jones. Jones got turned and Busch got clipped. Busch's car sped left across an area of the track used as an entrance to the road course portion of the speedway and then slammed hard into an interior concrete wall.

Busch climbed out of the 65 car before laying down on the grass near it.His wife was crying as she left the infield care center with team owner Joe Gibbs and team president J.D. Gibbs. Samantha Busch is pregnant with the couple's first child, a boy, due in May.

NASCAR has installed the SAFER barrier in the turns and other areas of other tracks but has consistently been criticized for not having the barriers everywhere on the inside and outside walls on ovals.

This is the second consecutive year that Daytona International Speedway, a track where the cars are limited in horsepower because of the high speeds, has been criticized for not having enough SAFER barrier.

Kevin Harvick hit a concrete wall at Daytona just beyond the pit exit last year -- not too far from where Busch hit Saturday.

The track added 2,400 feet of SAFER barrier before its race in July, but only to areas of the outside wall and not in the area where Harvick hit.

"This is not going to happen again," Chitwood said. "We did not live up to our responsibility, and the fix starts right now."

Chitwood said the speedway would install tire packs Saturday night along the 850-linear-foot section of concrete wall where Busch crashed so it will be padded in time for the 500.

He said DIS already has "tens of thousands" of linear feet of walls covered in SAFER barrier -- added during five separate installations.

Reaction from the crash was swift on social media. Six-time championJimmie Johnsoncalled on NASCAR to install the energy-absorbing material everywhere at race tracks.

NASCAR executive vice president Steve O'Donnell said Saturday that the organization will step up talks with tracks about adding SAFER barriers to all areas surrounding the racing surface.

"We always have these conversations with the racetracks," O'Donnell said. "The racetracks know that and work together with us on the SAFER barrier recommendations. We will accelerate those talks with the tracks. We want this sport to be as safe as possible, for not only our drivers but everyone who participates in this sport and the race fans as well."

Former driver Jeff Burton, now a television analyst, called on NASCAR to add more SAFER barriers, regardless of the cost: "It's very expensive but we have to find a way."

And Regan Smith, who earlier in Saturday's race rolled his car for the first time in his career, said it was inexcusable in 2015 for tracks hosting national events not to have SAFER barriers everywhere.

Ty Dillon, the grandson of Richard Childress, said after Saturday's race that NASCAR should have SAFER barriers "everywhere."

"We're going so fast," Dillon said. "... I think we can probably afford it. I hate to hear about anybody in our sport getting injured. The sport's advanced so far in safety that we shouldn't have any crazy, bad injuries."

Busch has 29 career Sprint Cup wins in 365 career starts. His best finish in the standings was fourth in 2013.

Sunday will mark the first time since 2000 that neither Busch brother will be represented at the Daytona 500 (Kurt Busch lost his final NASCAR appeal Saturday night to get his indefinite suspension rescinded). The two have combined for six top-5 finishes while earning more than $10 million.

Kyle Busch will not be awarded any points for Sunday's race. NASCAR, which requires drivers to compete each week to be eligible for its season-long championship, would have to grant Busch an exemption to not start a race he qualified for as well as to miss any future events and still be eligible for the Chase for the Sprint Cup.

Ryan Reed won the Xfinity race with a late pass of Brad Keselowski.

John Oreovicz of ESPN.com and The Associated Press contributed to this report.

Safety Concerns In NASCAR
Ricky Craven discusses the concerns of NASCAR drivers and the necessity to have SAFER barriers and possibly eliminate the grass on the infield.

Kyle Busch Will Not Race In Daytona 500
Marty Smith reports the latest on Kyle Busch, who will miss the Daytona 500 after injuring his right leg in a crash during the NASCAR Xfinity Series at Daytona.

Drivers Upset At Lack Of SAFER Barriers
Marty Smith discusses the response from drivers concerning Kyle Busch's injury after hitting a concrete wall at Daytona International Speedway and what needs to be done to make the sport safer.