Kyler Murray: Happy Manziel on side 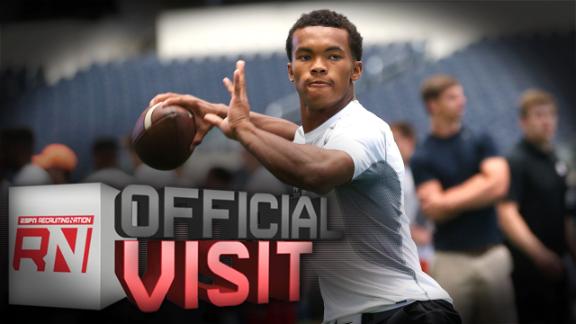 Kyler Murray is ready to be the next big thing at Texas A&M.

And if that means following in the giant footsteps that Johnny Manziel left behind, so be it.

Murray, the No. 1-ranked quarterback in the ESPN 300 who committed to the Aggies in late May, says he feels no pressure being what many call the heir apparent to "Johnny Football" when he arrives in College Station next year.

"If anything, it's all cool," Murray told NFL.com this week at the Elite 11 Finals at Nike headquarters in Beaverton, Oregon. "Johnny is Johnny, and he does his thing. We do play similar, and I can't deny that. But pressure? No, there's none of that going to A&M. Johnny left some big shoes to fill, and they're going to miss him for sure and what he brought to the table."

The comparisons between the two famed Texas high school quarterbacks are expected.

Manziel starred as a multidimensional quarterback at Tivy High in Kerrville.

Murray has done the same for Allen High, leading it to back-to-back state titles and being named the Gatorade Player of the Year as a junior.

The fact that their paths have crossed is no surprise.

The two QBs met at the Elite 11 competition two years ago, and they've been friendly ever since, even crossing paths at this week's event.

And when Murray's recruiting battle came down to Texas A&M and Oregon, it was Manziel -- who committed to the Ducks in high school before changing his mind and picking the Aggies -- who guided him toward College Station.

"Johnny really helped me out a lot and gave me both sides because he wanted what's best for me as a quarterback," Murray told NFL.com. "He knows Oregon and went to Oregon [for visits] but chose Texas A&M. He wasn't bragging on Texas A&M, he just gave me the best of both and I respect that. He gave me the truth.

"He doesn't really give me a lot of advice, we just talk like we're boys. He knows what to say, and we just talk as friends. It's good to have him in your corner."