Kyrie Irving has back tightness 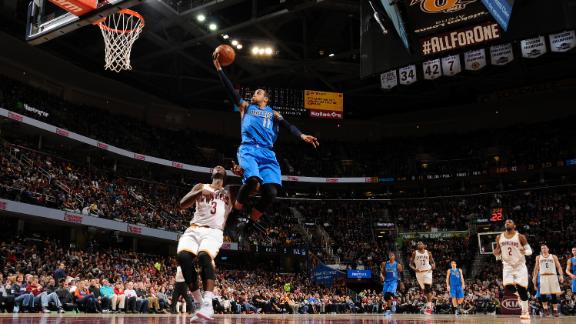 CLEVELAND -- Cavaliers point guard Kyrie Irving exited Sunday's 109-90 loss to the Dallas Mavericks early because of tightness in his lower back and will not travel with the Cavs for their game Monday in Philadelphia, according to the team.

Irving will stay back in Cleveland to rehabilitate his back, which is an injury he said he's never dealt with before in his career.

"I'm just in a lot of pain right now," Irving said. "Just have spasms, tightness. I have to do what I can to get better."

Irving's absence comes during a particularly tough time for Cleveland, losers of five of its last seven games and already missing starting center Anderson Varejao for the season with a torn Achilles and starting small forward LeBron James for two weeks because of strains to his left knee and lower back.

Irving scored a season-low six points on 2-for-9 shooting against Dallas as he subbed out midway through the third quarter and did not return.

"It disturbed him today," said Cavs coach David Blatt. "He was struggling, as you saw. He gave what he had but, that's why we pulled him out early and just rested him for the rest of the game. Obviously that made it difficult for us, but most importantly we just didn't want to risk him, so we pulled him out."

Irving originally hurt his back late in Friday's 91-87 win against Charlotte.

"It was tight in the Charlotte game in the fourth quarter and then I fell on it, which made it like 10 times worse," Irving said. "It's painful right now, but you just got to get through it."

Irving previously sat out two games with a bone bruise in his left knee, but the fourth-year guard said his back injury did not have anything to do with overcompensating for the knee pain.

"It's completely unrelated," Irving said. "It sucks because you got two injuries at one time. You try your best to get through it, but sometimes your body is telling you when to stop and this is the time right now."

The Cavs had already been starting backup point guard Matthew Dellavedova alongside Irving in the backcourt since James went out.

Irving's injury will likely cause Dion Waiters to join Dellavedova with the first unit.

"Long term no, but short term, certainly yes," Blatt said when asked if he was concerned about Irving's injury. "Certainly short term it's a worry."

"We have a long road ahead of us in getting guys healthy and figuring things out and continuing to get better every single day," Irving said.