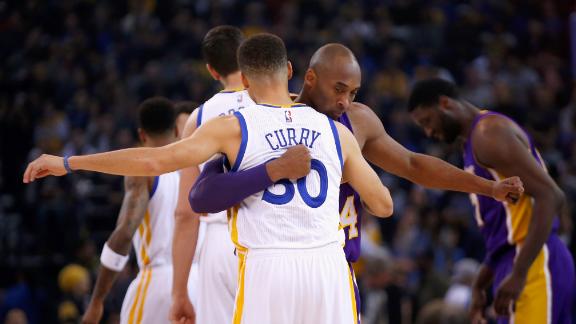 LOS ANGELES -- The Los Angeles Lakers woreKobe Bryant-themed socks in Sunday's shocking 112-95 win over the Golden State Warriors, marking the first time that an NBA team has ever worn a piece of equipment to honor a current player.

"How about that? The power of the socks. It's got to be the socks," Bryant said after the game. "I think it's cool, man. It's cool to do stuff like that. My kids freaked out when they saw the other version of the socks that had my afro on the side. They thought that was pretty sweet. But it was fun to be a part of."

The socks were produced by Stance, the NBA's official on-court sock provider, and were inspired and approved by Bryant, who is retiring this summer after his 20th NBA season.

There are three styles of Bryant-themed socks all told, but only one of them will be worn on the court. The other two are complementary fan pieces.

The style that will be worn by the Lakers in Sunday's game is called "The Final" -- a purple/gold/white/black set with the number 2 on the right sock and 4 on the left.This likely will not be the last time this season that the Lakers honor Bryant in such a fashion.A league source told ESPN.com that Lakers players want to wear the socks again.

The second style is known as "K. Bryant" and features a cartoon caricature of Bryant. On the left sock, the guard is wearing a No. 8 jersey with a haircut and goatee, as he did earlier in his career; on the right sock, Bryant is depicted in his later years, wearing a No. 24 jersey with a shaved head and a jutted jaw.

The third and final style is called "Kobe Faces." It's a black/purple/gold/white mismatched set that pays homage to Bryant's HeroVillain marketing campaign. "HERO" and "VILLAIN" are written on the socks in Mandarin, and the foot of the socks feature the HeroVillain and KB20 logos.

Bryant: Win over Warriors helps team's growth
Lakers star Kobe Bryant discusses how important their win over the Warriors was for the development of the team's young players, as well as how he felt playing in front of the home crowd and "soaking in" the remaining games of his career.