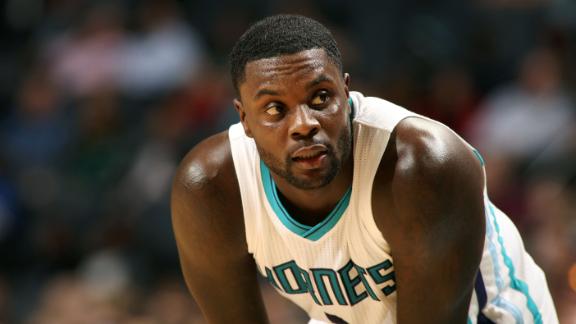 Charlotte Hornets swingman Lance Stephenson becomes eligible to be traded Monday and his new team is indeed exploring its options to move him, according to league sources.

Sources told ESPN.com that the Hornets, just 23 games into the Stephenson era, have already begun the process of searching for potential trade partners that would be willing to take the talented but enigmatic former Indiana Pacer off their hands.

Although sources say no deal involving Stephenson is imminent, Monday is the first day that players signed to new contracts in July are eligible to be dealt, which typically triggers what teams leaguewide regard as "trade season" over the next two months leading into the annual February trade deadline.

One factor that could ultimately lead to a deal, despite Stephenson's ragged and discouraging start, is the fact that the three-year, $27 million deal he received over the summer from Charlotte owner Michael Jordan is only guaranteed through next season. The third year of the deal is not guaranteed, which theoretically enhances Charlotte's chances of finding another team willing to gamble on the mercurial swingman.

Sources say that the Hornets are not in a move-him-at-all-costs mode with Stephenson but made it clear that Charlotte is ready now to abandon the experiment if a palatable deal presents itself.

Stephenson has quickly proved to be a poor fit alongside the Hornets' established core twosome of Al Jefferson and Kemba Walker, shooting 38.9 percent from the floor overall and 8-for-48 percent on 3-pointers during Charlotte's 6-17 start.

Projected by many NBA prognosticators to move up the Eastern Conference ladder this season after going 44-38 in 2013-14 to claim the East's No. 7 seed under first-year coach Steve Clifford, Charlotte ranks as one of the league's most disappointing teams through the first quarter of the schedule.

The Hornets followed up a double-overtime loss Friday night in Memphis with a 27-point home defeat Saturday to the Brooklyn Nets, who are in the midst of their own potential upheaval after ESPN.com reported earlier this week that the Nets had made it be known throughout the league that former All-Stars Deron Williams, Brook Lopez and Joe Johnson are all available via trade.

On Dec. 1, Grantland's Zach Lowe reported that the Hornets "have been aggressive making trade calls" and "are willing to talk turkey on basically anyone other than" Jefferson and Walker.

Clifford said recently that some of Stephenson's struggles to adjust to new surroundings in Charlotte stem from the fact that too much was expected after the 24-year-old spurned a five-year, $44 million from the Pacers to stay in Indiana to sign a shorter deal with the Hornets.

"To be fair, one of the things that's made it more difficult for him is that he came here and people proclaimed him as the next superstar," Clifford said. "He's not a star. He's a guy that has talent to become a star. To be a star in this league, you have to do it over years."

On multiple occasions already this season, Clifford has sat Stephenson in the fourth quarter because of concerns about poor spacing and lack of ball movement in the Hornets' offense. Charlotte recently endured a 10-game losing streak, with Stephenson yet to relocate the consistency that enabled him to lead the league in triple-doubles last season with the Pacers.