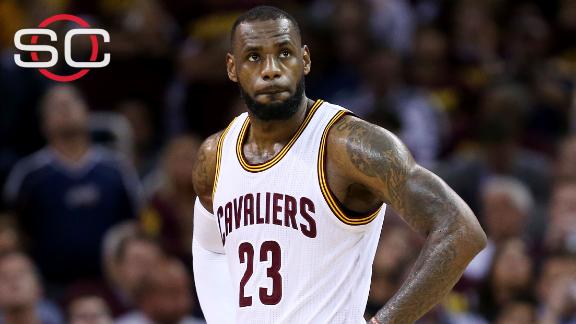 AKRON, Ohio -- LeBron James brought the glitz and glamour of Hollywood to his hometown Friday for a screening of the upcoming raunchy romantic comedy "Trainwreck," but he made it clear what he really wants to see is more talent brought in by the Cleveland Cavaliers this summer.

"It's been good so far, but we have a lot of work to do," said James, who co-stars in the movie, when asked about the Cavs' offseason. "We still got to re-sign Tristan [Thompson]. Hopefully we can bring back J.R. [Smith] as well and see if there's some other free agents out there that'd love to come here and play if we're able to do that.

Williams walked the red carpet at the "Trainwreck" event, arriving with Cleveland general manager David Griffin. Both received loud ovations from the roughly 500 fans who lined up outside the theater to get a glimpse of the stars in attendance, including Amy Schumer, Bill Hader, Vanessa Bayer and Judd Apatow alongside his wife, actress Leslie Mann.

James also was supported at the screening by his mother, Gloria, who rolled up to the red carpet in a white Porsche Panamera; his wife, Savannah; his longtime friends and business partners Maverick Carter and Randy Mims; and his high school coach, Dru Joyce.

"I try to do a lot for this city," James said of inviting the cast of the movie to Ohio. "Any way I can continue to uplift the city and the things that I do, it always kind of made sense to me. And this one did [too]."

Members of the cast spent Friday afternoon getting a feel for where James grew up, paying a visit to Swenson's, the beloved local drive-thru burger and milkshake establishment, where they got a meal and filmed a skit for FunnyOrDie.com.

"Thanks for hosting us," Schumer said while addressing the portion of the crowd that made it inside the theater to watch the film. "LeBron made us come here, but we're so psyched, because we just had Swenson's. It's delicious and I have not farted once, and I'm not kidding."

Schumer stars in the movie as a promiscuous magazine reporter assigned to write a feature on Hader, who plays an accomplished sports surgeon in New York City. Romance ensues. James plays himself -- or a sometimes-frugal, always-sensitive, "Downton Abbey"-watching version of himself -- who is friends with Hader's character.

"I don't mind it," James said when asked about being an All-Star in basketball but a supporting cast member on the big screen. "I'm a team player."

Schumer, who also wrote the script, envisioned James for the part of Hader's BFF and confidant from the start.

"[Schumer] put it in the first draft, and she claims it was because it was the only basketball player she'd ever heard of and she didn't think that he would accept the part," said Apatow, who directed and produced the film. "But Bill and I went out and had lunch with LeBron and explained what the joke was, and he was very receptive and really funny. Very enthusiastic the whole time. It wasn't like we had to spoon-feed it to him. He was really able to riff and play and made it much stronger. And it's a big part. It's not a cameo. It's a big supporting part."

James appears in a handful of scenes in the movie, including a one-on-one game with Hader that brings to mind the old "This is SportsCenter" commercial depicting Stuart Scott unapologetically dominating elementary-aged children on the court.

"We were excited to have fun with him really beating up on Bill," Apatow said. "It's one of the best scenes of the movie, I thought."

Amar'e Stoudemireof the Miami Heat and John Cena of the WWE also have supporting roles in the movie.

Hader, who was a cast member on "Saturday Night Live" when James hosted in 2007, singled out James' performance.

"He's great," Hader said. "Everybody who has seen the movie, sports fan or not, has said, 'Man, LeBron is a scene stealer.' He was great to work with."

The crowd that gathered for the screening appeared equally appreciative of James.

"It's very cool to have LeBron kind of show his loyalty to us. Bringing something Hollywood to Akron is really cool. We don't really see that here," said Ryan Weiss, 31, who stood by the red carpet wearing a baseball cap with Akron stitched in red capital letters across the front. "It's been really exciting. It's been cool watching his journey as he came back."

While James said he would consider another movie role in the future "if it fits right," he prioritized his basketball career, especially with the Cavs trying to avenge their Finals loss with a championship next season.