LeBron on Celts fans: 'You hear them' 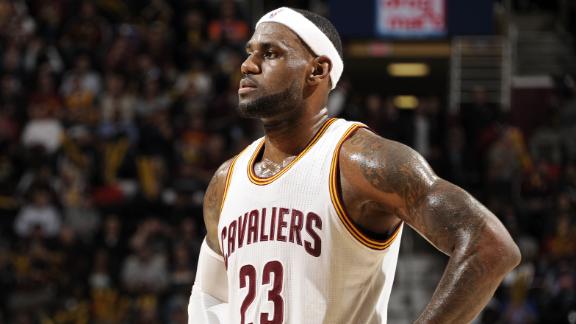 INDEPENDENCE, Ohio -- LeBron James is going back to the place where he played the last game of his first stint with the Cleveland Cavaliers. And he couldn't be happier.

James left the Cavaliers for Miami shortly after Cleveland lost to the Boston Celtics in six games in the 2010 Eastern Conference semifinals. James had a triple-double in Game 6 at TD Garden -- putting up 27 points, 19 rebounds and 10 assists -- but he also missed 13 of his 21 shots and had nine turnovers as the Cavs lost by nine.

On his way to the visitors' locker room after the game, James pulled off his Cavs jersey in what became a video that's been played on loop ever since.

He's since exorcised those Boston demons, beating the Celtics in a must-win Game 6 in the 2012 East finals, putting up 45 points, 15 rebounds and five assists on the parquet to propel the Heat to a seven-game series victory and an eventual NBA title over the Oklahoma City Thunder.

With James' second go-round with the Cavaliers just getting underway, he sounds excited about a return trip to Beantown.

The Cavs (3-3) play the Celtics (3-4) on Friday night. James has averaged 30.1 points in 36 career games against Boston, his highest scoring average against any opponent. He knows the Celtics faithful will be ready to greet him in their unique way.

"Oh yeah, you hear them," James said. "They have their own slang and twang. I know, obviously, being a part of that. And also just shooting a TV show ["Survivor's Remorse"] where [the main characters are] from Boston. So I know all about it.

"I grew up in Framingham," Blatt said. "Twenty miles west of Boston. Down the Mass Pike, up Route 9 and on the edge of Woodmere Road."

Although it's been 33 years since Blatt lived in Massachusetts and most of his friends and family have moved away, the coach was able to recall his old Boston accent upon request Thursday.

"I tell ya, when I get back they-ah, I'm gonna staht pahking ma cah in Havahd Yahd," Blatt said in his best Southie style. "It's easy for me to fall back into it, but it's gone now that I've managed to move on. See, I speak four languages but 17 dialects. I've been a lot of different places. 'Bahstan' talk is easy for me."

James said that it's "special" whenever the travel schedule brings his team to the hometown of one of its members.

"It'll be the same when we go to Philly for Dion [Waiters]. Then go to Miami for J.J. [James Jones]," he said after a reporter pointed out the team already made trips to Brazil (Anderson Varejao) and Portland (Kevin Love). "When you go to those towns, you want to try and help them win a ballgame. Leave out of their hometown with a win. We didn't do that for Kevin, so we have some making up to do."

James also addressed a makeup of sorts by the NBA this week. The league reviewed the game tape from Cleveland's 118-111 win over the New Orleans Pelicans and took away a rebound and an assist from James' initial tally, turning what would have been his 38th career triple-double into a final stat line of 32 points, 11 rebounds and 9 assists.

"I had two reactions," James said. "My first reaction was it didn't matter, we won. And who is the guy who actually is checking every stat? That was my second reaction.

"My kids didn't quite like it. They didn't care at all, they was like, 'Why would they do that?' It's crazy to them. My first reaction was it didn't matter, you guys know I don't really care. If we'd have lost and the assist was taken away I would've had a problem with it, but we won. But I just want to know who is actually in the office, 13 games a night, recording every statistical category. And if that's the case, why I'm the only one that's been the guy?

"It's my second time, by the way," he said. "First time, we played in [Madison Square] Garden. My triple-double was taken away in the Garden when I had 50 [points]. Now it's the second time it has happened. I don't know if it's a Cleveland thing or a LeBron thing. I don't know."

James was initially credited with 52 points, 11 assists and 10 rebounds in a win over the New York Knicks in February 2009, but one of those rebounds was subsequently credited to Ben Wallace, stripping James of the triple-dip.