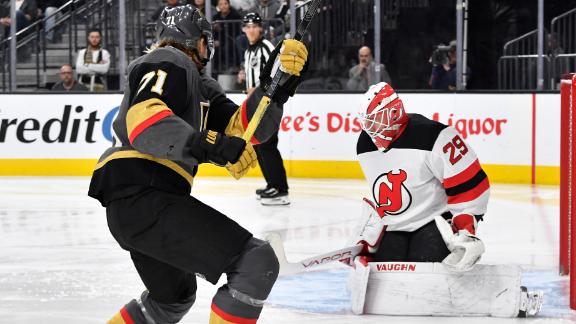 LAS VEGAS -- Marc-Andre Fleury has been the face of the Vegas Golden Knights since the team joined the league in 2017. Since Robin Lehner was acquired in a trade last month, Vegas coach Pete DeBoer has insisted the Golden Knights have two starting goaltenders.

"It's tough, but it's a luxury," DeBoer said. "I think the new NHL, you see everybody's trending towards more rest, fresher guys, using two goalies and it's a great luxury for a coach to have."

With two starts under Lehner's belt, DeBoer's enjoying that luxury.

"They traded for me here for a reason, and I'm just doing my best," Lehner said. "It's a great opportunity playing with Fleury. I got the same opportunity with (Chicago's Corey) Crawford and a bunch of other goalies throughout my career and I'm just trying to do the best with the opportunities I'm gonna get."

Lehner recorded his first shutout of the season and improved to 2-0-0 with a 1.00 goals-against average and a .967 save percentage since joining the Golden Knights. After allowing a goal on the first shot he faced as a Golden Knight, he beat Buffalo in his first start for Vegas.

"It'd be tough to let in the first shot again," Lehner said. "It's another step. I'm feeling better and better. The guys played great today, too. ... Just gotta keep building and getting back to my old game. ... It's just gonna get better with time, more practices, getting to know they systems a bit. When I feel comfortable I will be a lot more calm. ... It's easier with the system here."

Max Pacioretty scored his team-high 31st goal of the season for Vegas, while Ryan Reaves moved within one goal of tying a career-high with his eighth of the campaign.

The Golden Knights improved to 13-3-2 under DeBoer, who took over on Jan. 15 for fired Gerard Gallant.

The Devils, meanwhile, hadn't been playing like the 14th-place team in the Eastern Conference of late. They had picked up at least a point on each of the previous four games of their road trip (2-0-2) and overall had earned a point in six straight.

Until they ran into arguably the hottest team in the Western Conference.

"It was a disappointing effort," said coach Alain Nasreddine, whose Devils have just four regulation losses in 18 games (9-4-5) since the All-Star break. "If you look at our game in general, our execution was atrocious. Our level of focus wasn't great, and our execution cost us a lot of problems."

New Jersey's Mackenzie Blackwood, who went 6-0-1 with two shutouts, had a .967 save percentage and a league-best 1.27 goals-against-average during the month of February, made 29 saves. In his two starts against Vegas this season, Blackwood is 0-2-0 and has allowed seven goals.

After a flawless first period by both goaltenders, the Golden Knights awakened an announced crowd of 18,290 when Karlsson gathered a loose puck near the high slot in New Jersey's offensive zone, and sent a perfectly placed no-look, backhand pass to Pacioretty, who raced in and beat Blackwood with a wrister from the top of the left circle 45 seconds into the second.

Karlsson increased the lead 37 seconds into the third period. Nicolas Roy carried the puck into the slot before dishing to Karlsson, who rifled a one-timer past Blackwood to hit the century mark for his career.

After a 20-game drought without a goal, Karlsson has five goals and two assists in the last five games, including a hat trick and two goals during the team's homestand.

"It's a little easier to play now that I don't have that goal drought hanging over my shoulders," Karlsson said. "It's nice to get a couple of goals here, play and have fun."

Reaves punched in a loose puck during a scramble in front of Blackwood later in the period to provide the final margin.

Game notes
Vegas F William Carrier played in his 200th career game. ... Devils F Nikita Gusev was signed to a one-year, entry-level contract by the Golden Knights during the 2019 playoffs, but never played for them. Vegas traded the restricted free agent to New Jersey last July, and he's now the Devils' second-leading scorer with 42 points. ... During an impressive late third-period shift for Vegas, rookie D Zach Whitecloud blocked two vicious shots. He went straight to the locker room after the shift to get checked out.

Golden Knights: Open a five-game trip in Winnipeg on Friday.