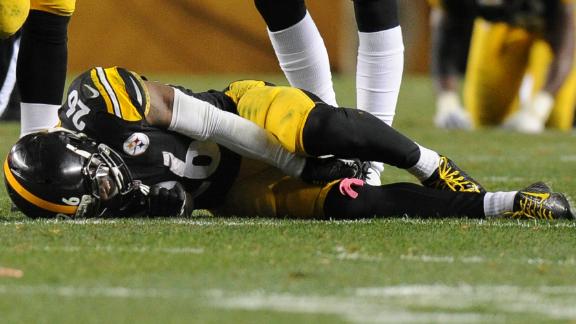 PITTSBURGH -- The Pittsburgh Steelers will try to win their first playoff game since 2010 without star running back Le'Veon Bell.

Bell did not practice this week after hyperextending his right knee last Sunday night and the Steelers have ruled him out for their AFC wild-card playoff game Saturday night against the visiting Baltimore Ravens.

Josh Harris, an undrafted rookie, is expected to start at running back, with Dri Archer, another rookie, and possibly Ben Tate also seeing action in place of Bell.

"The guys have to step up," wide receiver Antonio Brown said. "We know what [Bell] means to our team. I'm sure they're excited about their opportunities and we'll see what happens."

Bell was injured in the Steelers' 27-17 win over the Cincinnati Bengals when he took a helmet hit to his knee from safety Reggie Nelson.

He had been hopeful he would be able to play against the Ravens after doing some light running on Wednesday. But that optimism faded over the past two days after Bell could not build on the progress he made earlier in the week.

Bell, who has played in 29 consecutive games, led the AFC with 1,361 rushing yards this season. The 2013 second-round draft pick set a Pittsburgh season record with 83 receptions, and his teammates voted him Steelers' MVP last week.

He joined Dallas Cowboys running back DeMarco Murray on the NFL All-Pro team that was announced Friday.

Harris and Archer have combined for just 56 rushing yards, while Tate has rushed for 371 yards and four touchdowns in 11 games with the Cleveland Browns and Minnesota Vikings this season.

The Browns released Tate in November when he voiced displeasure with his diminishing role in the offense.

The Steelers signed Tate, who was also released by the Vikings, on Tuesday and the four-year veteran went through three practices with Pittsburgh.

"We'll all get out there," said the speedy but small Archer, who was the Steelers' third-round draft pick last May.

Harris, a Wake Forest product, will find himself in unlikely territory if he starts against the Ravens. He did not join the Steelers until after training camp had started and was on the practice squad until Nov. 18, when Pittsburgh signed him to its 53-man roster after waiving LeGarrette Blount.

He has excellent speed, and the 5-foot-11, 190-pounder broke off a 59-yard run against the Bengals. A holding penalty reduced the gain to 3 yards, but teammates said it provided a glimpse of what Harris can do when he gets an extended opportunity.

Harris said it bolstered his confidence in himself.

"I'm just trying to make sure that as soon as I have the chance I can show this team, 'Hey, he can go in there and help us win,'" Harris said. "I felt pretty good with the all the things they asked me to do [this week]. Hopefully that can show up [Saturday] night."

Steelers Talk Bell's Injury
Josh Harris and Dri Archer discuss their roles now that Le'Veon Bell (knee) will not be playing in Baltimore in the Steelers' AFC wild-card playoff game against the Ravens.

Who Will Get The Ball For The Steelers?
ESPN Steelers reporter Scott Brown discusses the Steelers' depth chart at running back in the absence of Le'Veon Bell, who will not play against the Ravens on Saturday.