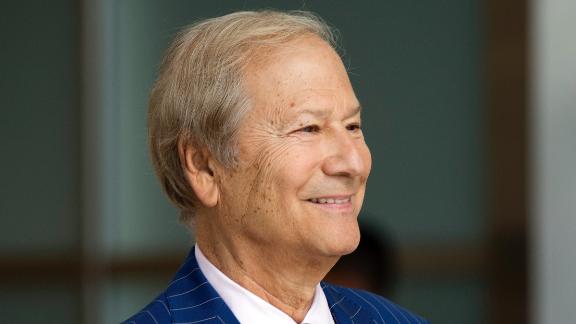 Former Nets owner Lewis Katz was killed along with six other people in a fiery plane crash in Massachusetts, his business partner said Sunday. He was 72.

Harold H.F. "Gerry'' Lenfest confirmed Katz's death to The Associated Press, saying he was informed by their lawyer, Richard Sprague. The crash came just days after Katz and Lenfest gained full control of The Philadelphia Inquirer by buying out their co-owners for $88 million in a deal that ended an ugly monthslong feud among the partners.

Katz, who had been an investor in the Yankees Entertainment and Sports Network, bought the Nets in 1998 and owned the team during its most successful years in New Jersey, as the team reached the NBA Finals in 2002 and '03. He sold the team in 2004.

He also owned the NHL's Devils at one time.

"All of us at the NBA were extremely saddened to learn of the tragic, sudden death of former Nets owner Lewis Katz," NBA commissioner Adam Silver said in a statement. "Lewis was a trusted friend and valued member of the NBA family. He was a visionary businessman who touched the lives of so many with his tireless pursuit of innovation and enterprise, as well as his deep commitment to his family, friends and community.

"Among his many accomplishments were having led his Nets teams in 2002 and 2003 to the NBA Finals for the first time in franchise history. I send my deepest condolences to the Katz family during this very difficult time."

NHL commissioner Gary Bettman in a statement called Katz a man of "tremendous influence" and sent condolences to Katz's family and "the many organizations that benefited from his philanthropy."

Katz, who grew up in Camden, New Jersey, made his fortune investing in the Kinney Parking empire and the YES Network in New York.

The Yankees held a moment of silence before Sunday's game.

"The New York Yankees are deeply saddened by the tragic passing of Lewis Katz last night. We would like to express our deepest, heartfelt sympathies to his family," Hal Steinbrenner, the team's principle owner, said in a statement.

"Lewis was a minority owner of the Yankees and a valued, long-time friend and colleague to so many of us within the organization. We will cherish his sense of humor, intellect, and deep sense of philanthropy. Lewis had a huge heart and was always there when someone needed help. He will forever be remembered."

Scott O'Neil, CEO of the Devils and the Philadelphia 76ers, called Katz "a passionate leader, philanthropist and humanitarian."

Katz, in testimony at an April hearing on the Inquirer's sale, said he had lost money on both the Nets and Devils, but made it big through the 2012 sale of YES.

"We lost our shirt in the Devils and the Nets,'' he testified. "But for the YES Network, I'd be back in my law office in Cherry Hill, waiting for the clients to come in again.''

Katz also was a major donor to Temple University, his alma mater.

The Gulfstream IV crashed as it was leaving Hanscom Field at about 9:40 p.m. Saturday for Atlantic City, New Jersey. A National Transportation Safety Board official said the plane went off the runway, rolled onto the grass beside it, then struck an antenna, and then a fence, according to Philly.com.

There were no survivors.

Katz was returning to New Jersey from a gathering at the home of Pulitzer Prize-winning historian Doris Kearns Goodwin. Also killed was a next-door neighbor of Katz's, Anne Leeds, a 74-year-old retired preschool teacher he had invited along, and Marcella Dalsey, the director of Katz's son's foundation.

The identities of the other victims weren't immediately released. Nancy Phillips, Katz's longtime companion and city editor at the Inquirer, was not on board.

Katz's wife, Marjorie, died in December. His survivors include his son, daughter Melissa, and several grandchildren.

Katz, a classmate of Bill Cosby in Temple's 1963 graduating class, had spoken at the school's commencement last month, and received an honorary doctorate.

"Life in my view is meant to be enjoyed," he told the graduates. "It's meant to have as much fun as you can conjure up"

When the crash occurred, nearby residents saw a fireball and felt the blast shake their homes.

Hanscom Field is about 20 miles northwest of Boston. The air field, which serves the public, was closed after the crash.