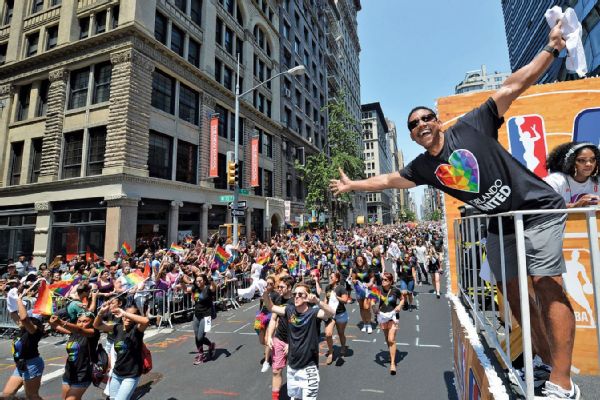 NEW YORK -- Shavonte Zellous is thrilled that the New York Liberty will have a float in Sunday's pride parade, the first for a sports franchise in the city.

"I'm excited. I haven't been in a pride parade before, so I think I'm more excited than most," said Zellous, a guard who wore rainbow-colored shoes Friday night for the Liberty's pride game. "Especially with the stuff that happened in Orlando last year. I want to thank the [WNBA] and the Liberty for doing a thing like this. I think it will be a great turnout."

New York players, coaches and front-office staff will be on the float rolling down Manhattan's Fifth Avenue, ending in the West Village.

"I think everybody is jumping on board and open to the mentality of, it's your life, that's what you want to do, I'm going to support you," Zellous said. "I'm going to be happy for you regardless."

"We like to lead and our motto is 'Show up,'" Liberty president Isiah Thomas said. "We've been the first in a lot of the social justice and equality areas and standing up and speaking out, and we invite all the other leagues and sports teams to participate and follow."

The WNBA has been at the forefront of pride activities over the last four years, with all of the teams getting involved. Many players have marched at pride parades before, but no teams have had a float, according to the league.

"It's going to be a great day," said Thomas, who will try to make it back for the parade after being out of town to attend a memorial service. "Wish we all could be there. It's one of the biggest and funnest events in New York."

Thomas was surprised that the Liberty hadn't had a float before, but in the past the team usually had a game on the day of the parade, which made it difficult.

The NBA and WNBA had a float in the parade last year, with NBA commissioner Adam Silver and WNBA president Lisa Borders both attending. The two leagues will do so again.

"It's an excellent thing, diversity and inclusion is a value of our family, what we did last year and continue to do this year is to bring those values to life. The audio matches the video," Borders told The Associated Press in a phone interview. "We're walking the walk."

Borders used to be the vice mayor of Atlanta and marched in that city's pride parade for seven years.

"This is a regular thing for me as a leader and person who believes in opportunity for all and inclusion for all," she said. "I grew up in the era of civil rights and it's natural for me."

Connecticut Sun coach Curt Miller, who is openly gay, applauded the Liberty and the league for having their floats.