Lindsey Vonn gets World Cup win No. 77 in second race after injuries 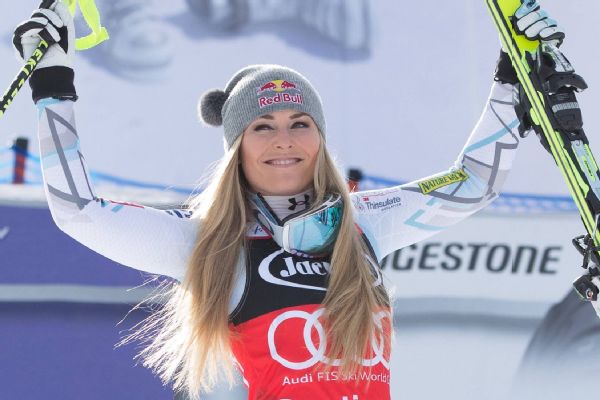 Lindsey Vonn is back on top in just the second race of her comeback from a knee injury and a broken arm.

The American edged defending overall World Cup champion Lara Gut to win a downhill event in Garmisch-Partenkirchen, Germany, on Saturday and claim career victory No. 77, moving her within nine wins of the record held by Ingemar Stenmark.

After finishing 0.15 seconds ahead of Swiss rival Gut and 0.48 ahead of Viktoria Rebensburg of Germany, Vonn collapsed to the snow in celebration and shed tears of joy. She also grew emotional when she embraced her once-estranged father, Alan Kildow.

"I just got to the bottom and I cried," Vonn said. "I worked really hard to come back. I feel like sometimes I come back so quickly. Everyone forgets how much time and energy and blood, sweat and tears it takes to come back without any training and just jump in there.

"I had to trust myself and my team and my technician and we all did our best, and today was just amazing. I'm so happy that it only took me two races to get back on the top step."

Vonn broke her upper right arm 10 weeks ago in a training crash on Copper Mountain, Colorado, while recovering from a left knee injury that ended last season prematurely in February. She finished 13th in the first race in Altenmarkt-Zauchensee, Austria, last weekend.

Last week, Vonn revealed that she struggled with nerve damage so severe that she couldn't move her fingers soon after undergoing arm surgery in November. She has been skiing with a battery-operated heated sock over her right hand to help her maintain feeling and hold her ski pole.

Racing after Gut and Rebensburg, Vonn lost some time when she went wide midway through her run but was able to hold to her advantage with her gliding skills.

"I gave myself a little bit of extra room so I could carry the speed in that section," Vonn said.

Without any sun on the Kandahar course, it was difficult for skiers to see the bumps and terrain. Still, Vonn pushed from start to finish.

Vonn's last win also was in a downhill event in Garmisch last February.

She already passed Annemarie Moser-Proell's women's record of 62 wins across all events two years ago. Next up is the outright record held by Stenmark, the Swedish great who garnered his wins between 1975 and 1989.

In the overall standings, Gut gained 80 points on Mikaela Shiffrin -- more of a technical specialist who is not racing this weekend -- but still trails by 235 points.

Ilka Stuhec of Slovenia finished eighth and leads Gut by 117 points in the downhill standings.

Austria's Christine Scheyer, who recorded her first win last weekend, went wide a few gates from the finish and failed to clear a gate. Johanna Schnarf had trouble in the same spot, losing control and falling, but the Italian appeared to avoid serious injury.