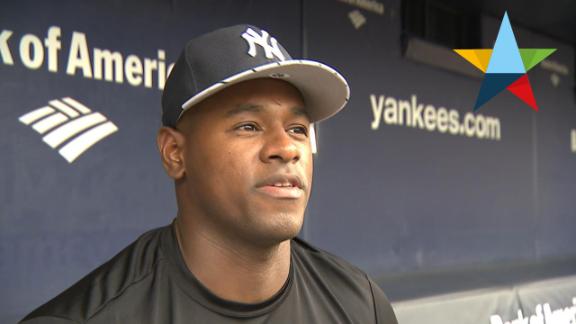 This interview was conducted in Spanish and has been translated.

Just two years after Yankees pitcher Luis Severino arrived in the U.S. at age 19, he made his major league debut as a starter for the Yankees against the rival Red Sox in August 2015 (becoming the youngest starting pitcher of the 2015 season). After a difficult 2016, splitting time between the Yankees and their Triple-A team, Severino has started off 2017 in impressive form, with a 2.90 ERA and a 4-2 record. He spoke with Marly Rivera about making the transition to the U.S. from the Dominican Republic, his thoughts on interpreters in baseball and how the Yankees have gotten off to such a hot start.

What was the most difficult thing for you when you first arrived to the U.S.?

I arrived at 19 years old, and I think the most difficult thing was the language -- learning the language, learning to communicate, ordering food.

I've been told a lot of funny stories about ordering food, do you have any?

We would arrive, a whole group, and I would always wait for Americans to order first. They would order their food, and then I would see what they had ordered. So, [I'd tell myself] this is called chicken, that's called this and that. The first thing I learned to say was "pizza," "chicken sandwich." From then on, I started learning a bit.

What kind of food did you eat when you first arrived?

I was in Charleston my first extended season, and there are no Hispanic people there; there's no Latin food. There was no sazón [Latin food seasoning]. With the rice, you had to season it however we could, the same with the meat and the rice, with whatever we could find. We took turns cooking, five of us. One day one of us would cook and another one would do the dishes, and so on.

Who taught you to cook?

My mom. My mom and my wife. I learned on FaceTime. We would put on FaceTime right then and there, and I would cook the food. The first time I made rice, it came out almost raw. But after that I kept on learning.

When you were in the minor leagues, what helped you more -- English lessons or talking to your teammates?

Is it easy now to talk to the press in English?

How did you start to feel comfortable addressing the press in English?

I would watch the others. I would see [Michael] Pineda speaking in English. So I decided to try. The first time I was a little nervous, but after the second or third time I felt more comfortable. Here we talk about baseball, and what we know about baseball, we know how to say it in English.

It's easier because the topics are baseball-related?

Exactly. [I am asked about] how I did, what was working, if my slider was OK, about my fastball command.

Do you believe it's fair to criticize Masahiro Tanaka because he still needs an interpreter?

That is as a matter of someone's personal opinion. For me, I believe it's fine. If he still doesn't speak the language well, he needs someone to help him out there. It's the same with Gary [Sánchez]. If Gary needed help and Marlon [Abreu, the Yankees' Spanish interpreter] wanted to go to the mound to explain it to him, I think that's perfectly fine.

It's about the player feeling comfortable?

Earlier this week, Mike Schmidt said Odubel Herrera can't be a leader in the clubhouse because he does not speak English. Do you think that's true?

As I said, those are personal opinions. If [Herrera] speaks Spanish, and he has what it takes to be a leader, he can get a translator and pass along the message in Spanish and someone can interpret it.

During spring training, there was no guarantee that you were going to be in the rotation.Did you put pressure on yourself to win a job?

Is there a way to describe what it's like to be in the Yankees' rotation at such a young age?

It means a lot to me. I've always been a Yankees fan. Being here pitching with them is a dream come true. And I'm doing my best to stay up here with the team.

You guys always say it's hard to make it to the majors, but staying up here is even harder. How does one stay up here?

The key is to improve every year. You can't show up one year and say, "I did well, so I'll stay the same." You have to improve every single year and learn from all the things that go wrong. Sometimes you have a bad year and you get frustrated by that bad year. But you have to learn from that what happened. Just like me last year. I had a lot of problems, mostly with my fastball. In the offseason, I said I'm going to fix this, and when next year comes, I know I'm going to be better.

So this offseason, you worked with Pedro Martínez, right?

I have a friend, his name is Héctor Gómez, and he gave me [Pedro's] number. I called him. We met at Quisqueya Stadium, and the first thing he told me was to loosen up. He told me he wanted to watch me throw on flat ground. After I was done, he started telling me what to do, and what we worked on the entire offseason was in my mechanics. [Pedro said,] "The only thing you have to work on are your mechanics because sometimes you lose your rhythm."

Is there a way to describe what it means to work with Pedro -- not just one of the best pitchers from the Dominican Republic, but in all of major league baseball?


When he told me to meet him for the first time, he told me to get there at 2 p.m., and I got there at 12. I arrived two hours before so I would not miss the opportunity. It's not every day that you get to work with a player like that, a Hall of Famer, who decides to help you. It feels incredible. He is a great person. I would have never thought Pedro Martínez would be like that. It was an incredible moment.

What is the biggest difference between Luis Severino now and the one who made his debut with the Yankees at 21?

When I first came up, I thought baseball was played best by the strongest -- the ones who threw the hardest, the ones with the most skill. That's not the case. I now believe that baseball is all about your mental strength -- who's smarter. It doesn't matter if you throw 100, if you throw 100 down the middle and you give up a home run. You have to locate your pitches. For me now, a baseball game is 90 percent mental. I think that's been the biggest impact.

Have you ever lost focus because of the last name at the plate?

When I first debuted, that was a big hurdle. When I first saw David Ortiz up there, I said to myself, 'Wow, that's David Ortiz. Darn!' It was the same thing the first time through the whole [Red Sox] lineup. These were players that I saw on TV when I was little. I couldn't believe that now I was playing with them -- David, Hanley [Ramírez], [Dustin] Pedroia. It was hard, but the second time around the lineup, I calmed down. I also had the pleasure of playing alongside Alex Rodríguez. I think that when Alex Rodríguez debuted in the majors, I was barely even born, and I got to play with him. Those are amazing things.

Who would you like to face who you haven't yet?

Albert Pujols. My spot [in the rotation] doesn't come up [in Anaheim next week]. But he's still got a few years left, so hopefully I will do so later on. He's going to be a difficult out.

Many analysts expected the Yankees not to be contenders until next season. Why are you doing so well "ahead of schedule"?

It's what the team is accomplishing as a whole; the combination of hitting and pitching has been good. We have a group of young guys who are hungry to play ball and who are always going to compete.

And there are so many players up here with whom you played in the minor leagues -- similar to those Yankees teams that won so many championships.

That's important because we have had time to get to know each other. We know how everyone works. This clubhouse is amazing. When you have spent so much time playing with these guys, you get to know them as brothers.

What's the best lesson you've learned from your teammates on the Yankees' rotation?

Last year, I learned the most from them. When things were going badly, they gave me a lot of advice. They told me it's not always going to be like this. You're not always going to throw four or five shutout innings and then in your last inning give up a bases-loaded home run, have a bad start. It won't always be like that. They gave me a lot of good advice and told me that if I worked a lot in my repetition, things would work out for me. So that's what I try to do.

What have you focused on achieving this season? Do you have a specific goal?

When the season starts, I don't have specific numbers in mind. I think all pitchers want to win 20 games, they want to go to the All-Star Game, they want to compete for the Cy Young. But my goal is to be up here the whole year and help the team win. That's what I want. To be able to compete in a World Series, that's my biggest dream.

Severino and his transition to the American culture
Luis Severino of the New York Yankees shares some of his struggles outside of the field and how he was able to overcome them.
Report a correction or typo
Related topics:
sportsespnmlbespnluis severinonew york yankeesnews beisbol experiencedominican republic
Copyright © 2020 ESPN Internet Ventures. All rights reserved.
More Videos
From CNN Newsource affiliates
TOP STORIES 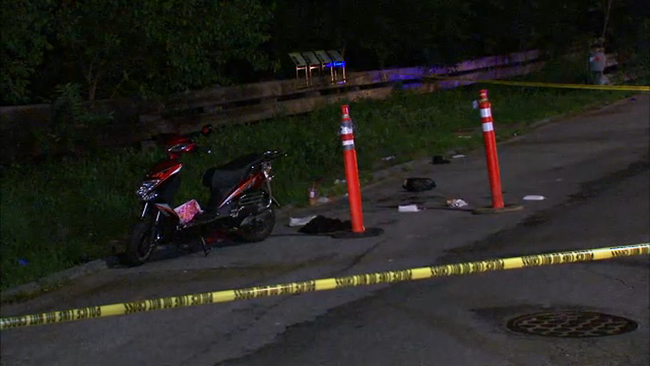