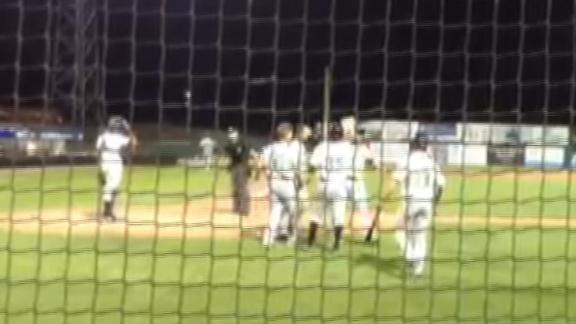 BURLINGTON, Iowa -- Being down 16 runs after five innings was no problem for a minor league affiliate of the Seattle Mariners on Wednesday night.

The Clinton LumberKings trailed the Burlington Bees 17-1 after five in a game between clubs based in Iowa. Nineteen runs later, the comeback was complete for Clinton, which wound up winning the Class A Midwest League game 20-17 in 12 innings.

- SportsCenter (@SportsCenter) May 8, 2014Clinton scored six runs in the sixth inning, five in the eighth and five more in the ninth to tie it at 17. Justin Seager, younger brother of Mariners third baseman Kyle Seager, drove in the go-ahead run in the 12th. Seager finished with four hits.

When asked whether he had ever been part of a game like the one Wednesday night, Seager said, according to MLB.com: "I don't think so. I don't know if anybody's ever played a game like that before."

LumberKings second baseman Lonnie Kauppila had extra incentive to get a hit when he followed Seager's tiebreaking grounder with a two-run single.

"Being up by one and knowing I was going to have to pitch when I haven't pitched in five years, I really wanted to get us some extra runs," he said, according to MLB.com. "I was really glad that I was able to get that hit."

Turned out Kauppila didn't need the insurance runs, as he set the Bees down in order in the 12th inning to earn the save.

The teams combined for 35 hits, including eight doubles, one triple and five home runs. Marcus Littlewood hit a ninth-inning grand slam for the LumberKings that forced extras.

Burlington is an affiliate of the Los Angeles Angels.

"That's one for the ages for me, for sure," Burlington manager Bill Richardson said, according to The Hawk Eye newspaper. "You just give credit to your opponent for flipping the game on us. We just gave them a little life in that sixth, and they kept running."