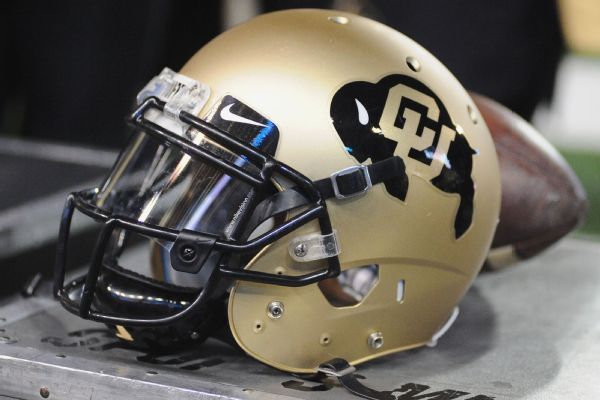 The University of Colorado suffered a traumatic day on Wednesday.

First, a man armed with a machete inside the Champions Center, the home of the football program and athletic administration, was shot and killed in the morning when he refused to drop the weapon, police said. Later that day, police responded to a false report of an active shooter at the student center.

The unidentified man waved the knife in a menacing way during an altercation with another person in the parking lot of the sports complex and then went inside a building, campus police spokesman Scott Pribble said.

Police confronted him and asked him to drop the weapon, Pribble said.

"He refused, and it was at that time for public safety that shots were fired," he said.

Pribble said he did not know the nature of the altercation in the parking lot or whether the man was a student.

In a statement Wednesday afternoon before the second incident, Colorado athletic director Rick George said: "Regarding the incident this morning in our Champions Center, first and foremost all our student-athletes and staff are safe. We have safety protocols in place, and when everyone received the campus alert, all responded accordingly and the protocols were effective.

"I want to recognize the Boulder and CU police departments for their prompt and swift response to this incident and neutralizing the suspect. Their quick actions allowed for this situation to be ended without further incident."

The already tense campus then endured another scary scene, however, as false rumors of an active shooter in the school's main student center, University Memorial Center, created panic from students and a significant response from police.

Dozens of police cars sped through the campus with lights flashing and sirens blaring, past the previous crime scene where football coaches remained in lockdown, to the student center a few blocks away. Students streamed out of the building, some of them crying, while police entered with rifles and heavy gun power.

A tense and uncomfortable scene played out for the next 15 minutes as students tried to figure out what was happening. Some students in the food court area said everyone at once rushed out of the building, following one another in a sort of stampede, even though no gunshots were fired. Another student, on the floor above, said people began yelling about "an active shooter," as the evacuation continued.

No gunfire could be heard inside the building. At 1:14 p.m. MT, the university's Twitter account posted, "Alert: Shortly after 1:05 p.m., police officers rushed to UMC & College Avenue on FALSE report of active shooter. All Clear. No incidents."

Even after the school issued the "all clear," an investigation appeared ongoing, as several dozen more students and faculty exited the student center in a single-file line with their hands raised in the air. Police cars also still surrounded the building.

Despite the original all-clear, the same official Twitter account issued a "CU Alert" 25 minutes later to notify students of "unconfirmed reports of active harmer at the UMC. Avoid area. Take appropriate protective action." It was the second "CU Alert" that all students and faculty received -- both through Twitter and direct texts to their phones -- on Wednesday.

The first came at 9:28 a.m., when the school said, an "armed man with machete is in the Champion [sic] Center. Take appropriate protective action."

Around 9:20 a.m. local time, police reported "shots fired" inside a stairwell and said the suspect was down. CU police then announced a suspect was in custody.