Manny Pacquiao: 'I want that fight' 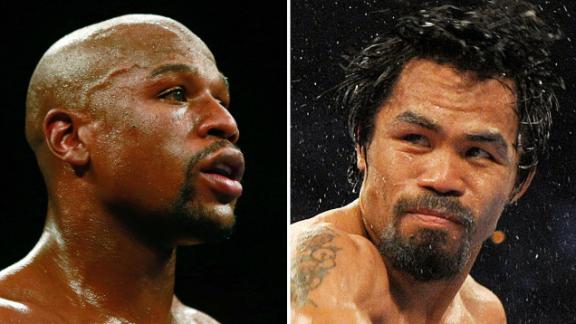 Welterweight titleholder Manny Pacquiao is in the final preparations for his upcoming defense against junior welterweight titlist Chris Algieri, but he made it clear what he wants next should he be victorious.

"I do have one specific goal, and that is to give the boxing fans the fight they have always asked for," Pacquiao said this week. "I want that fight [with Floyd Mayweather Jr.], too."

Pacquiao, who regained his 147-pound title from Timothy Bradley Jr. with a resounding unanimous decision in their rematch on April 12 -- two years after Bradley claimed the belt via highly controversial split decision -- will face Algieri on Nov. 22 (HBO PPV, 9 p.m. ET) at the Cotai Arena at the Venetian Macao in Macau, China.

As Pacquiao and Mayweather wind down their careers, Pacquiao reiterated his desire to make the fight the world has wanted for several years. However, it has gone unmade despite multiple attempts to put it together. Lately it has been Mayweather who seems ambivalent about making a deal.

After Mayweather (47-0, 26 KOs), 37, who has won titles in five weight divisions, outpointed Marcos Maidana for the second time this year in September, he was asked, as usual, about fighting Pacquiao at the postfight news conference.

"I don't even think about Pacquiao," Mayweather said. "I don't even know him, actually. But I wish him nothing but the best. But that's not my focus. I could care less about what Pacquiao does. I don't wish anything bad on the man. I try not to focus on no one else's business.

"If it happens, it happens. You guys can keep asking the same questions over and over. I move when I want to, where I want to and how I want to. Hopefully, it's next."

However, the Filipino legend Pacquiao (56-5-2, 38 KOs), 35, boxing's only eight-division titleholder, did not sound as if he believed Mayweather was serious.

"I believe good-faith negotiations could produce that fight," Pacquiao said. "But it is impossible to negotiate when you are the only one sitting at the table. Two fighters who want to fight each other have never been kept from fighting each other."

"How can I talk for Mayweather? As far as the Pacquiao fight is concerned with Mayweather, as much as a lot of people surrounding it would want it to happen, myself included and Manny included, Floyd is reluctant to fight Manny Pacquiao, period," Arum said. "If people don't see that by now, they are never going to see it."

'24/7': Pacquiao-Algieri
Go behind the scenes as Manny Pacquiao and Chris Algieri prepare for their Nov. 22 title fight in Macau.