Manny Ramirez to report on Thursday 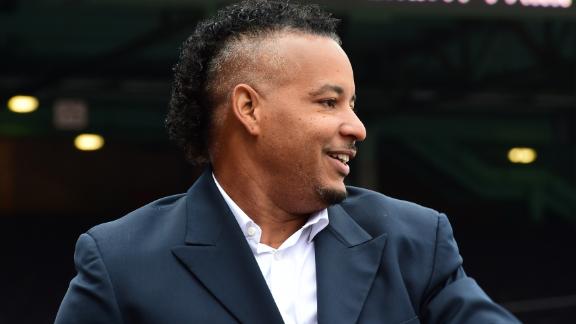 CHICAGO -- Manny Ramirez will join the Triple-A Iowa Cubs on Thursday as a player/coach, the team announced Wednesday.

Ramirez, 42, was signed by the team in late May and has been at the Cubs' spring training facility in Arizona working with minor league and rehabbing players while getting into game shape himself. The Iowa Cubs play in Colorado Springs this week, where Ramirez, who has hit the most home runs in postseason history, could make his debut.

When the Cubs signed the former batting champion they stated it was only to help mentor their young sluggers and occasionally play, but not with the intention of being called up by the big club. The Cubs boast two of the top home run hitting prospects in all of baseball in Kris Bryant and Javier Baez.

"We have some exciting, young offensive prospects and Manny knows as much about hitting as anybody," Cubs president of baseball operations Theo Epstein said recently. "I think he can enhance the solid hitting instruction we already have in the minor leagues. Manny is probably the calmest right-handed hitter I've seen in the box and so if he can help teach that calmness to just one player in our system it will be worth it."

Both Bryant and Baez are right-handed. Bryant is having a huge year split between Double-A and Triple-A, but Baez has struggled for much of 2014.

"Manny had the best approach I've ever seen against a right-handed breaking ball," Epstein said. "The way he talks about that is really insightful. He has a lot to offer."

Bryant, who has five home runs in six games since being promoted to Iowa, is looking forward to learning from Ramirez.

"Manny was one of my favorite hitters to watch growing up," Bryant said Wednesday on "The Waddle & Silvy Show" on ESPN Chicago 1000. "He was on the Red Sox which was a team that my dad got drafted by so we always grew up watching the Red Sox. I just really loved watching him hit so I really can't wait for him to join us. I think we're all going to have a lot of questions for him."

Ramirez hit .312 with 555 home runs in a 19-year big league career. Outfielder Casper Wells was released to make room for Ramirez on the Iowa roster.