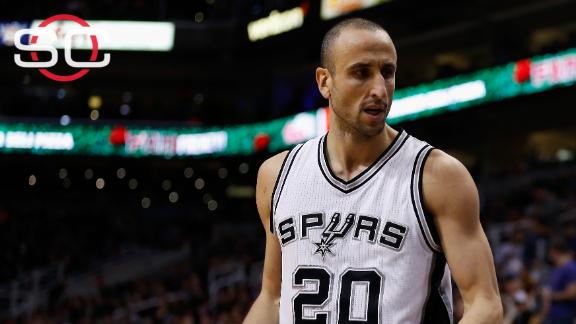 The San Antonio Spurs won't have Manu Ginobili for at least a month.

The team said the veteran guard had testicular surgery Thursday in San Antonio and will be sidelined at least four weeks.

Ginobili was hurt in Wednesday night's 110-97 win against thePelicans.

A team trainer and teammate Tim Duncan helped Ginobili to the locker room late in the fourth quarter after the guard collapsed to the court and doubled over in pain from an apparent knee to the groin area from New Orleans' Ryan Anderson.The Pelicans power forward was whistled on the play for an offensive foul.

Several Spurs and team personnel quickly rushed to check on Ginobili before helping the guard to his feet. Ginobili took a few steps, and nearly collapsed again, before a trainer and Duncan were able to walk him to the locker room.

"I don't want to joke with that," point guard Tony Parker said when asked about Ginobili's condition Wednesday. "It doesn't look good."

Spurs power forward David West said he thought Ginobili would be fine. But immediately after the game, none of the Spurs knew the extent of Ginobili's injury.

"I have no clue," Spurs coach Gregg Popovich said. "I haven't seen him. He wasn't in the locker room, I don't think. I don't know what the hell happened."

The Spurs entered Thursday in second place in the Western Conference with a 41-8 record, four games behind the Golden State Warriors. Ginobili is averaging 10.0 points, 3.3 assists and 3.0 rebounds per game, sparking a bench that now likely will turn to rookie wing Jonathon Simmons for more minutes and energy.

The Spurs also have been without Duncan, who has a sore knee. He's missed the past five games and was ruled out for Friday's matchup against the Dallas Mavericks. Popovich hasn't ruled out the possibility of keeping Duncan sidelined through the Feb. 14 All-Star Game.