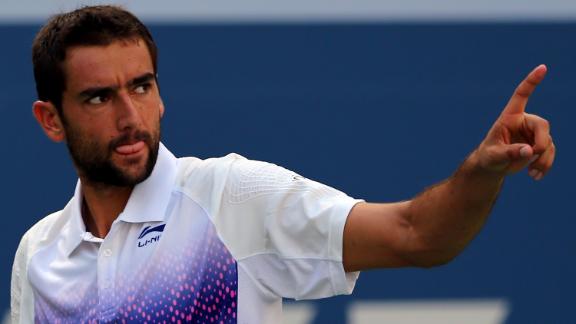 NEW YORK -- Defending champion Marin Cilic overcame a tweaked right ankle thanks in large part to 23 aces and returned to the US Open quarterfinals with a 6-3, 2-6, 7-6 (2), 6-1 victory over 27th-seeded Jeremy Chardy of France.

Cilic smacked serves at up to 132 mph, relying on that big shot to carry him in the pivotal third-set tiebreaker. Cilic hit four serves in that tiebreaker and each one was an ace.

The ninth-seeded Croatian has won his past 11 matches at Flushing Meadows, where he reached his first Grand Slam final a year ago.

He rolled his ankle early in the second set but seemed to be moving fine by late in the third, which he ended with a down-the-line backhand passing winner on the run.

Nineteenth-seeded Frenchman Jo-Wilfried Tsonga, who has yet to drop a set or lose his serve through four rounds, beat countryman Benoit Paire 6-4, 6-3, 6-4 in 1 hour, 42 minutes Sunday to set up a quarterfinal meeting with Cilic.

Tsonga, the 2008 Australian Open runner-up and a former top-five player, missed the first 11 weeks of this season because of an arm injury. He had lost three of his last four matches coming into the US Open but has served extremely well here, facing just two break points overall and none Sunday.

He's also had a favorable draw and has yet to play a seeded opponent. That will change against the ninth-ranked Cilic as Tsonga seeks to reach the semifinals at Flushing Meadows for the first time. It's the only major where he has never made it to the semis.

Tsonga is now 12-1 in his career against fellow Frenchmen in Grand Slam matches. The 41st-ranked Paire was playing in the fourth round at a major for the first time. He upset fourth-seeded Kei Nishikori, last year's runner-up, in the first round.