Mariota to be in Hawaii for draft 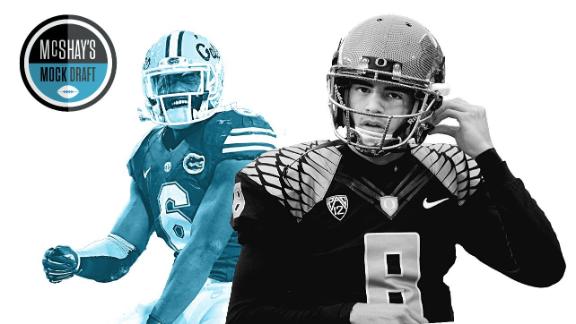 Just as Jameis Winston does not plan to attend next month's NFL draft in Chicago, neither does Heisman Trophy-winning quarterbackMarcus Mariota,according to league sources.

Mariota informed the league he plans to be in Hawaii among his family and the community that helped raise him. Mariota told the NFL that it is important to him, both personally and culturally, to be in Hawaii to celebrate the next step in his life.

League sources said Mariota expressed appropriate respect to the league and its draft event, but it still is a blow to the NFL, which as of now, will not have the top two quarterback prospects and potentially the top two picks in the draft, attend its prime-time event in Chicago.

The NFL had been hoping to prop up Chicago, but the top quarterbacks have declined the invitation.

Mariota's decision should not be confused with shunning the draft spotlight; he intends to invite both networks, ESPN and NFL Network, to broadcast his draft-day experience. It's just that he prefers to be in Hawaii rather than Chicago when he is selected.