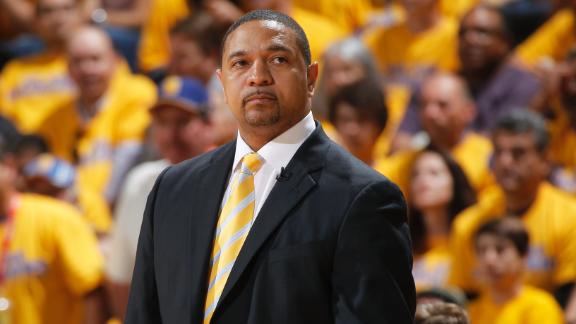 Jackson will work Sunday during ESPN's telecast of Game 1 of the Eastern Conference Finals between the Miami Heat and Indiana Pacers.

A former All-Star point guard during his 17-year career as a player, Jackson was fired by the Warriors earlier this month following the team's first-round playoff loss to the Los Angeles Clippers. The Warriors have hired Steve Kerr, another analyst without coaching experience.

The Warriors went 51-31 this season under Jackson, posting their best record since 1991-92.

Jackson went 121-109 in three seasons with Golden State, which reached the postseason each of the last two years. He had been mentioned as a possible candidate for the New York Knicks' vacant head coaching position.

Next Option For Knicks Coach
Stephen A. Smith discusses the Knicks' options in their search for a head coach, now that Steve Kerr has agreed to a deal with the Warriors, and identifies who would fit best with Phil Jackson.
Related topics:
sportsespnanalystmark jacksonnbacoachgolden state warriors
Copyright © 2020 ESPN Internet Ventures. All rights reserved.
More Videos
From CNN Newsource affiliates
TOP STORIES