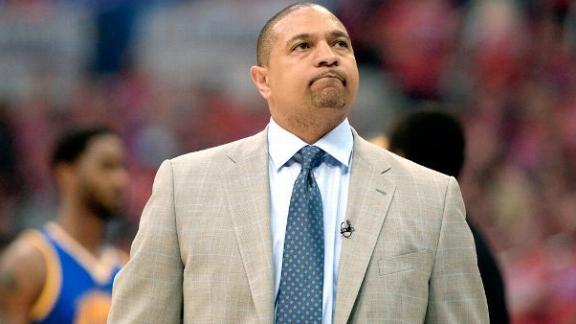 Mark Jackson defended the job he did as coach of the Golden State Warriors on Wednesday and invited his critics to put their names behind their words.

The third-year coach was fired Tuesday after helping the Warriors to a 51-31 regular-season record and a first-round playoff showing, where they lost to the Los Angeles Clippers in seven games.

"We did it without David Lee last year in the playoffs, and we were asked to do it this year without [Andrew] Bogut unfortunately," Jackson said in a radio interview with 95.7 The Game. "And up one [point] in a Game 7 on the road against a No. 3 seed with two of the top 10 players in the world, the Sixth Man of the Year Award winner and a future Hall of Fame coach -- I'd say we're proud of what we've done on the floor."

Jackson, though, had issues with how his tenure ended. Reports surfaced Tuesday afternoon that he would be fired before the Warriors confirmed the news in a release.

"The unfortunate thing is I go in an office with an owner and a general manager, just us three, and while in our office it's tweeted out that I'm in a meeting and I'm about to be fired. That's not how you conduct business," he said in the radio interview. "And if that's how business relationships are supposed to be done, well then they're 100 percent right, I did not conduct business the right way if that's the right way. And that's unfortunate."

Jackson did not agree that his public religiosity was an issue, contending that the Warriors used it for positive PR.

"I think it's unfortunate because if it was true, you don't encourage media to come do a piece on my church, on my ministry, the work on my faith," he said in the interview. "Don't do it when it's convenient and you're searching for something. I never went around beating people in the head with a Bible."

The Warriors preferred that Jackson live in the Bay Area, but he maintained his residence near his church in Los Angeles.

"When they hired me they knew I wasn't living here," he told 95.7 The Game. "It wasn't part of the job description. It wasn't a demand, and [Warriors owner] Joe Lacob said even yesterday, if he had to go back he probably would say that or he definitely would say that. That's fine. We can't go back to three years ago. And maybe I don't take the job if that's part of the description. But Doc Rivers coached in Boston living in Orlando. The coaches that I played for lived other places.

"I'm one of the first ones in the office, and I'm one of the last ones to leave, if not the last. So don't look for excuses. Just say it didn't work. Just say it didn't work and let's move on like grown folks. Because there's nothing that you said to do from day one that I did not do. And if you want me to live here, well, buy my house in L.A. and buy me a house here. Doesn't that make sense?"

According to a report in the San Jose Mercury News, Jackson had "zero relationship" with assistant general manager Kirk Lacob, who is the owner's son. Jackson, though, said he had no issues with the younger Lacob.

Jackson did say he regretted his handling of two assistants at the end of the regular season. The Warriors reassigned Brian Scalabrine to the D-League on March 25 because of what Jackson called a "difference in philosophies." Then the Warriors fired Darren Erman on April 5 for reportedly recording conversations during coaches' meetings and discussions between coaches and players without their knowledge.

"And unfortunately the second issue is well documented now. Disappointing ... but when you create an environment that seeks something like that or creates something like that, it's unfortunate. And I can't say as far as what has been documented, relationships and all that, because for the life of me I can't figure it out. I'd like them to identify who it is that I have a problem with and friction with. Come on out and talk. Come on out and say that I treated you wrong, I treated you bad.

"At the end of the day, I'm a guy that stays in my own lane. And I believe that I have a boss to speak to, and my boss was Bob Myers. And anybody else could talk to me, but that was my boss, and I wasn't going to go dancing around attempting to undermine him or have relationships. That wouldn't be fair to him, and that's the way that I was raised. And unfortunately when you do that, you create an environment where two assistant coaches wind up being let go."