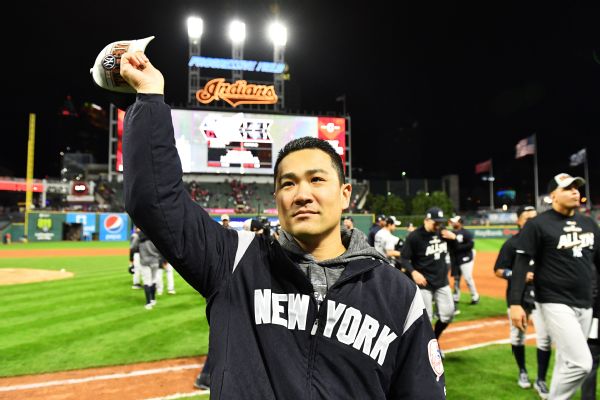 Masahiro Tanaka has decided not to declare for free agency and instead will remain with the New York Yankees.

As part of his original seven-year, $155 million contract signed in 2014, Tanaka had the right to opt out after his fourth season.

"I have decided to stay with the Yankees for the next three seasons," Tanaka said in a statement on Friday. "It was a simple decision for me, as I have truly enjoyed the past four years playing for this organization and for the wonderful fans of New York."

Tanka has enjoyed his time in New York and apparently did not want to risk leaving the Bronx.

"I'm excited to continue to be a part of this team, and I'm committed to our goal of bringing a World Series championship back to the Steinbrenner family, the Yankees organization and the great fans of New York," Tanaka said.

Tanaka, 29, had a down year in 2017. He began the year as the Yankees' Opening Day starter but ended it as ex-manager Joe Girardi's fourth choice to start a playoff game. Tanaka ended the regular season 13-12 with a 4.74 ERA.

Tanaka's injury history also complicated his decision. During his first major league season in 2014, Tanaka missed a couple of months because of a small tear in the UCL ligament of his right throwing elbow. Tanaka, upon doctors' advice, did not have Tommy John surgery. The elbow has not flared up again since.

Tanaka did finish the 2017 season strong. In his final regular-season start of the year, he threw seven scoreless innings and struck out 15 against the Toronto Blue Jays. In the postseason, he was lights out, making three starts, winning two of them and giving up only two runs in 20 innings (0.90).

The Yankees signed Tanaka prior to the 2014 season for a total of $175 million. The Yankees posted a $20 million fee to Tanaka's Japanese club, while Tanaka signed the seven-year, $155 million contract.