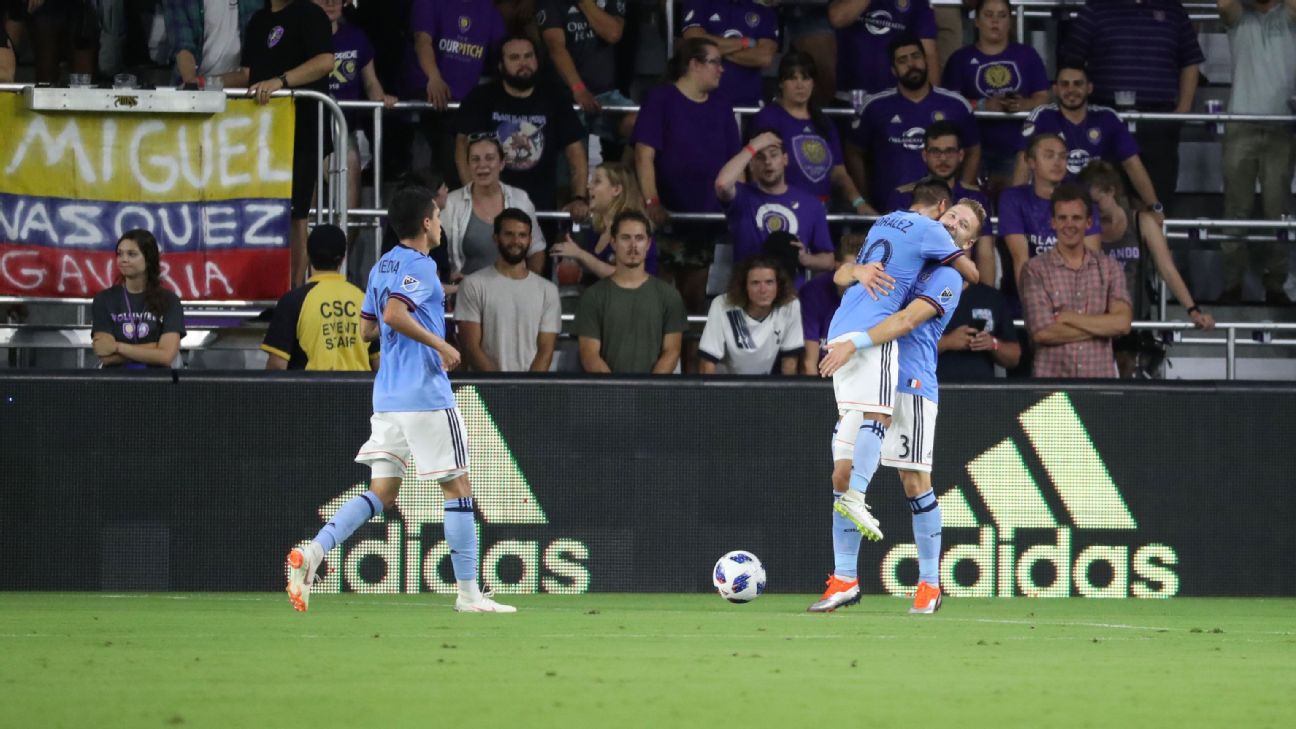 Sean Johnson stopped five shots for his fourth consecutive shutout and Maxi Moralez had a goal and an assist to lead New York City FC to a 2-0 victory over Orlando City in a battle of 2015 expansion rivals on Thursday night at Orlando City Stadium.

Anton Tinnerholm also scored for New York City FC, which snapped a six-game road winless streak and moved within one point of Eastern Conference-leading Atlanta United with a game in hand.

Johnson, who benefitted from four Orlando City shots hitting either the post or crossbar, extended his shutout streak to 408 minutes with his club-record fourth shutout in a row.

Earl Edwards Jr. finished with three saves for Orlando City as the Lions lost for the 11th time in 12 games.

NYCFC, which posted its first road victory since a 2-1 decision over the San Jose Earthquakes on March 31, missed an excellent chance to take the lead in the fifth minute. Midfielder Moralez stole the ball from Lions defender Chris Schuler and broke in alone into the middle of the box where Edwards stopped his right-footed attempt and also an ensuing rebound try for a rare double save.

Orlando City's best first-half chance came in the 38th minute when Yoshimar Yotun, alone outside the middle of the penalty box, took a pass from Sacha Kljestan and fired a shot that hit the top of the crossbar and bounced over.

Two minutes later, Moralez gave NYCFC a 1-0 lead when he put in a rebound of a Rodney Wallace shot that bounced off the post straight to him. Moralez fired it into the top left corner of the net for his eighth goal of the season.

NYCFC then made it 2-0 in first-half stoppage time after an Orlando City turnover at midfield. Moralez then found Tinnerholm coming in alone on the right side of the penalty box, and the right back fired a left-footed shot past a diving Edwards and inside the far post for his fourth goal of the season.

Orlando City peppered the NYCFC goal midway through the second half, but Yotun hit the right post with a tough-angle shot and Johnson kicked away a close crossing attempt by Dom Dwyer to keep the Lions off the scoreboard.

Schuler also hit the crossbar in the 78th minute from the top of the box.

Orlando City finished the game with just 10 men after defender Shane O'Neill was shown a red card in the 83rd a harsh late challenge on Moralez.

The Lions still had a good chance to score in the 89th minute on Josue Colman's shot from the left side of the 6-yard box, but it deflected off the foot of an NYCFC defender and off the top of the crossbar.