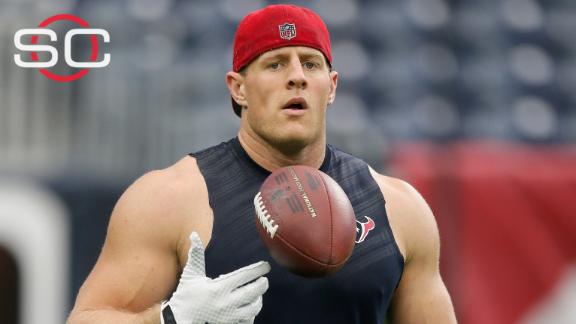 HOUSTON -- Asked to weigh in on Deflategate, Bob McNair said Tuesday that his team's biggest star wouldn't destroy evidence as Tom Brady did with his cellphone, an act that "escalated" the situation, the Houston Texans owner said.

"What escalated the whole thing is that Brady and thePatriotswere going to cooperate fully, and then when it came down to it, they didn't," McNair told Houston's Sports Radio 610. "If it wasJ.J. Watt, I think he would have been cooperative, and itwouldn't be a question. ... I don't think J.J. would destroy his cellphone."

McNair's comments came in response to a question from host Mike Meltser, who asked whether he would have considered due process served if Watt faced the same situation as Brady.

After an investigation, the NFL determined Brady and two ball boys conspired to deflate footballs in New England's 45-7 win over the Indianapolis Coltsin last season's AFC Championship Game. Brady was suspended four games, then appealed the suspension to NFL commissioner Roger Goodell, who upheld the suspension. Brady is now appealing the decision in federal court.

During the appeal hearing, it was revealed that Brady, instead of turning his cellphone over to investigators, handed over emails and texts but destroyed the actual phone shortly before he was scheduled to be questioned in the probe.

"Is there anything conclusive there? No, you don't have any conclusive evidence," McNair said. "But the whole idea is we want to make sure we have a competitive playing field that's level for everybody ... don't want people breaking the rules."

McNair added: "In the minds of somebody in that organization, they thought it was important. They thought it would give them a competitive advantage, and that's why they did it ... You just want to eliminate that kind of situation if you can."

McNair also shared his impressions of various parties' roles in the Deflategate investigation.

"You know, when you look back on it, if Brady had just said, 'Look, my guys know I like a softer ball, and that's what I like, and so they do it. But I don't go out and check the pressure of the balls.' ... I don't think there would have been an issue," McNair continued. "It would have been a problem with the guys on the training staff who deflated the balls, and the Patriots would have got some kind of minor penalty; it wouldn't have been a big deal."

The Texans play the Patriots on Dec. 13 in Houston.