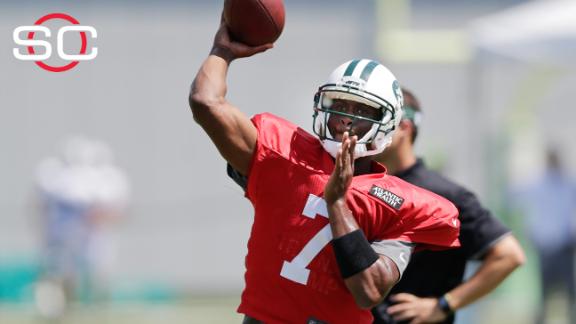 EAST RUTHERFORD, N.J. -- It has been an interception-free training camp for New York Jets quarterback Geno Smith, but that didn't stop the small home crowd at MetLife Stadium from booing him Saturday night after a couple of hiccups in a practice under the lights.

Smith, not a fan favorite after two inconsistent seasons, laughed it off.

"The camera should've zoomed in on me; I had a big smile on my face," he said afterward. "You'd think we were on the road today."

Smith, the Jets' presumptive starter, got off to a slow start before an announced crowd of 10,000-plus. He lost the ball on a strip sack, threw a near-interception and misfired on a miscommunication with his new wide receiver, Brandon Marshall.

The crowd, in midseason form, grew impatient and let him hear about it. The fans didn't seem to care it was only a glorified practice -- game situations, but no live tackling.

Smith rallied to throw two touchdown passes, both to Marshall, putting the third-year quarterback in an upbeat mood.

"In two years, I've developed some really thick skin," he said. "I know how to handle it now."

Smith, who has 41 turnovers in 30 games, let it get to him last season. After one home game, he cursed a heckler behind the Jets' bench and was fined by the league. He rebounded from an in-season benching, finishing on an upbeat note.

The Jets traded for veteran Ryan Fitzpatrick, but they're still counting on Smith to be their opening-day starter -- even if they haven't named him yet.

Smith has been sharp through nine practices, drawing a positive reaction from the fans who have watched practices at the team's complex in Florham Park, New Jersey. But the mood changed when they traveled 30 miles to their home stadium.

"I heard about the New York crowd," said Marshall, whom the Jets acquired in a trade with the Chicago Bears. "It's a great crowd, but it can be a tough crowd. We have to do our job and keep them happy and I think we'll have a chance this year to do that."

Marshall could be a big reason. He scored on touchdowns of 35 and 1 yard, helping Smith to a 10-for-13 night.

By the end, the fans were cheering.

"Hopefully," Smith said, "they're a little more patient during the season."