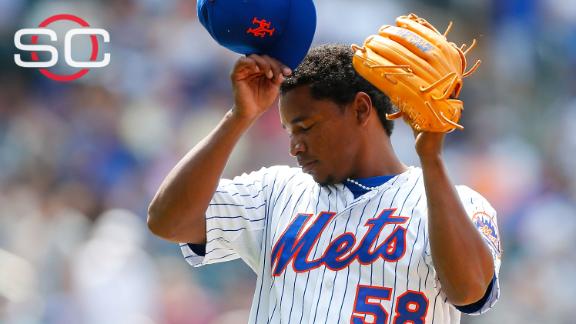 Mejia had just returned on July 7 after completing an 80-game PED suspension.

"Not surprisingly, there's a tremendous amount of disappointment -- I think to some extent anger, to some extent amazement -- that this could happen so soon after a previous suspension was completed. And some sadness," Alderson said. "This is having a tremendously adverse effect on a very promising major league career, and that's a shame. But the rules are the rules. We support the rules. This is the consequence of making bad choices."

Alderson spoke of his and the team's reaction of shock and surprise.

"I was totally shocked. Incredulous -- whatever the right term is -- that this could happen so swiftly on the heels of a past suspension. Couldn't understand it," Alderson said.

Mets manager Terry Collins said after Tuesday's 4-0 win over theSan Diego Padreshe saw a lot of players shaking their heads when he told the team about Mejia's punishment in the clubhouse beforethe game.

One reliever whose role is solidified because of Mejia's second suspension is Bobby Parnell, who wants the team to dodge the distraction and avoid dwelling on it.

"We can't do anything about it. We have to pick up and move forward,'' Bobby Parnell said after the game. "I still consider him a friend. ... Obviously, he's got some personal things going on outside this clubhouse.''

Major League Baseball declined comment about whether Mejia's latest positive test came before or after he was activated from the initial suspension. This time, Mejia tested positive for the anabolic steroids Stanozolol and Boldenone. The earlier suspension was for Stanozolol.

Because of the first suspension, Mejia was subject to six additional urine tests and three additional blood tests over 12 months following the violation.

Mejia, 25, issued a statement at the time of the first suspension in April indicating he had no idea how the performance-enhancing substance entered his body.

Mejia had tossed 7 scoreless innings since his July 12 return to mound.

Alderson said Major League Baseball gave the Mets a heads up on Monday regarding the potential imminent suspension. By that time, Alderson said, the acquisition of setup man Tyler Clippard from the Oakland Athletics essentially had been completed.

"Our track in talking with Oakland about Tyler as well as other players was independent of this situation," Alderson said.

Alderson said the Mets would not seek to obtain another reliever before Friday's 4 p.m. ET non-waiver trade deadline as a result of Mejia's suspension.

The Mets still have a strong late-inning relief corps with closer Jeurys Familia, Clippard and Parnell.

Alderson said he was not prepared to pronounce Mejia's career with the Mets over.

"I wouldn't want to be that hasty today," Alderson said. "But if you just think about the total suspension, when he might be able to return, the commitment that would require from us, it's something we're going to have to think about. Obviously, we're disappointed, and we'll see where it goes.

"I think trust plays a big part. It's not just a matter of trust. It's a matter of reliability. For every player on our roster, there's another player who is not on our roster. So dependability, consistency, those are all important considerations."